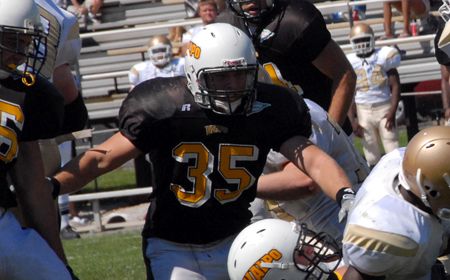 Ryan Koepke is one of two Crusaders named to the Academic All-Star Team.

Ryan Kozey (Waterford, Wis./Union  H.S.) and Ryan Koepke (Fort Wayne, Ind./Homestead H.S.) each represented the Crusaders on the team, which was selected by the FCS ADA.  Nominees had to have a minimum 3.20 grade point average as well as a starter or key reserve.  They also must be in their second year of athletics, participated in 50% of the games played at their designated position, and be a starter or key reserve with legitimate athletics credentials.

Kozey is a senior offensive lineman and a two-time First Team All-Pioneer Football League selection for the Crusaders.  A team captain and a three-year starter, he is a civil engineering major with a 3.75 grade point average and has been named to the PFL Fall Academic Honor Roll three times.  Last year, he also was named to the league’s All-Academic Team.

Koepke is a senior linebacker and a two-time Second Team All-PFL pick for the Brown and Gold.  Also a team captain, he is a mechanical engineering major with a 3.64 GPA and has been named to the PFL Academic Honor Roll three times in addition to last season’s All-Academic Team selection.  This season he finished second on the team with 69 tackles.