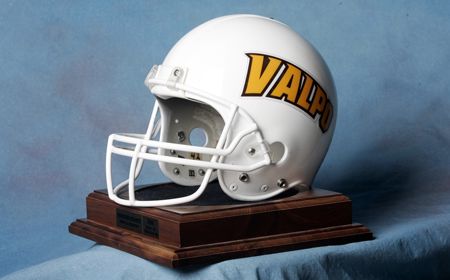 This Week in Crusader Football: Valparaiso looks to reclaim “The Hoosier Helmet” this week while also trying to pick up its first Pioneer Football League victory of the season when the Crusaders head south to Indianapolis to battle first place Butler.  This week marks the midway point of the 2009 football season.

Head Coach Stacy Adams: Stacy Adams is in his fifth season at the helm of the Crusader football program, taking over the team prior to the 2005 season.  Adams has a 15-34 record both overall and at Valpo.  He is the 15th head coach in Crusader history, and just the sixth since 1946.

Scouting Butler: The Bulldogs are one of just five unbeaten teams remaining in the NCAA Division I-FCS and are coming off of a bye week.  The last time Butler took the field, the Bulldogs kicked a last second field goal to defeat San Diego 25-24 on October 3.  Andrew Huck leads the offense completing 115-of-175 passes for 1245 yards and 15 touchdowns already this season while Zach Watkins has hauled in eight scoring grabs.  Defensively Mark Giacomantonio has already intercepted four passes while Grant Hunter has eight quarterback sacks.

Wrapping Up San Diego: The Toreros jumped out to a 28-0 halftime lead on the way to a 48-7 victory over the Crusaders to spoil Homecoming at Valparaiso.  Eddie Morelli scored his first career touchdown with a three-yard run for the Brown and Gold while Bobby Wysocki rushed for 101 yards.  San Diego’s defense returned two interceptions for touchdowns on the way to the win.

The Hoosier Helmet: The fourth edition of “The Hoosier Helmet” game takes place on Saturday with the Crusaders looking to reclaim the helmet from Butler.  The tradition began in 2006 with Butler winning the inaugural game before the Crusaders claimed the trophy for the first time in 2007.  The trophy is a white helmet with a Valpo logo on one side and a Butler logo on the other mounted on a wooden base.

Long-standing Rivalry: With this being the 68th meeting between Valpo and Butler, the Crusaders will have faced the Bulldogs more than any other in program history.  The two former Indiana Collegiate Conference foes began playing on the gridiron in 1927, just the ninth season of intercollegiate football for Valparaiso.  Saint Joseph’s (Ind.), which Valpo began playing in 1921, is the second most common opponent for the Crusaders, as the schools met for the 62nd time to open this season.

MASH Unit: Valparaiso has fallen victim to the injury bug throughout the season.  Out of 22 starting positions between offense and defense, 31 different players have earned at least one start this season.  Only 13 players have started all five games for the Brown and Gold this season.

Wysocki Runs for 100: Quarterback Bobby Wysocki rushed for 101 yards for the Crusaders against San Diego last Saturday, marking his first 100-yard game of his career.  The redshirt-sophomore averaged 7.8 yards per carry and leads the team with 196 yards rushing on the season as well.

Well-Disciplined: Valparaiso was penalized just one time in last week’s game against San Diego for just five yards.  The lone flag came for a delay of game.  On the season, the Crusaders have had just 22 penalties for 172 yards (34.4 yards per game) in five contests.

Morelli Scores First Touchdown: Eddie Morelli found the end zone from three yards out on Saturday for his first collegiate touchdown.  The redshirt-freshman running back has carried 19 times in four games this season.

Gokan Steps Up: Getting his first career start against San Diego, linebacker Cody Gokan led Valpo with seven tackles, including a sack.

Making the Stop: JaVon Welch leads the Crusaders with 36 tackles this season, including 16 solo stops.  The redshirt-sophomore has also broken up a pair of passes on the year as well as forcing a fumble and registering 2.5 tackles for loss.

Crawford and Treadaway Create Takeaways: Eli Crawford and Laurence Treadaway are responsible for all five takeaways by the Valpo defense this year.  Crawford has intercepted a pair of passes and recovered a fumble while Treadaway has pounced on two loose footballs.