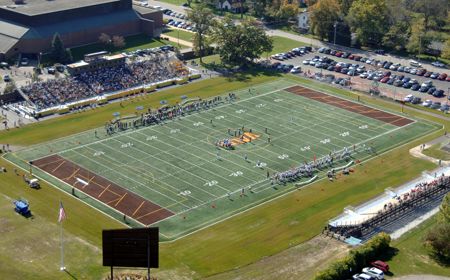 Games at Brown Field will now be held under the lights!

The installation on the lights at Brown Field has now been completed and with it Valparaiso University has announced night games this fall in football as well as men’s and women’s soccer.

The Musco Sports lighting structures were completed and tested earlier this week, and will not only be used for varsity competition, but will allow Crusader athletic teams to practice later into the evening.

The Crusader football team will play at home under the lights for the first time ever on September 18 for the home opener against longtime rival Saint Joseph’s (Ind.) in a 7 p.m. kickoff.

Valpo’s women’s soccer team will play a pair of home contests at night this season.  The August 27 match against Eastern Illinois as well as the September 10 contest against Eastern Michigan will kickoff at 7 p.m.

All eight of the men’s soccer’s regular season matches will be played under the lights.  Sunday night matches will kickoff at 6 p.m. with the exception of the home opener on September 19 against Bowling Green which will start at 7 p.m.  All other matches during the week will also be played at 7 p.m.

“To have the university's first lighted athletics facility is an exciting step forward for the department,” ValparaisoUniversity director of athletics Mark LaBarbera said.  “Playing in the evenings will enable more of our students and fans to attend games and help bring the excitement of Valpo athletics to more people.”