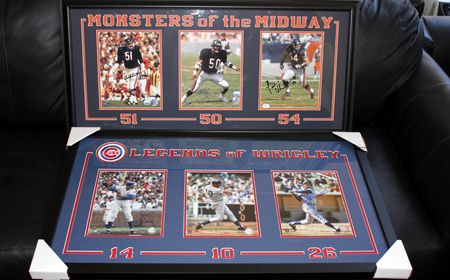 The two pictures will be auctioned off on Saturday.

Valparaiso University’s football team will be holding a silent auction for a pair of autograph items during Saturday’s football game against Saint Joseph’s (Ind.) as part of Communiversity Day on campus.  Kickoff for the game is set for 7 p.m. at Brown Field.

The first item is for Monsters of the Midway which features autographed pictures of Chicago Bears great linebackers Dick Butkus, Mike Singletary, and Brian Urlacher.

The second item is of Cubs Legends which features autographed pictures of Ernie Banks, Billy Williams, and Ron Santo.

Both come with a letter of authenticity for the autographs and are nicely framed.  Bids will start at $300 with proceeds benefiting the Crusader football program.  Cash or checks only will be accepted.

The silent auction table will be set up near the tailgating tent during the Communiversity Day BBQ which begins at 5 p.m. and will be moved inside the east gate of Brown Field at 6:30 p.m.  Winners will be announced at the start of the fourth quarter.