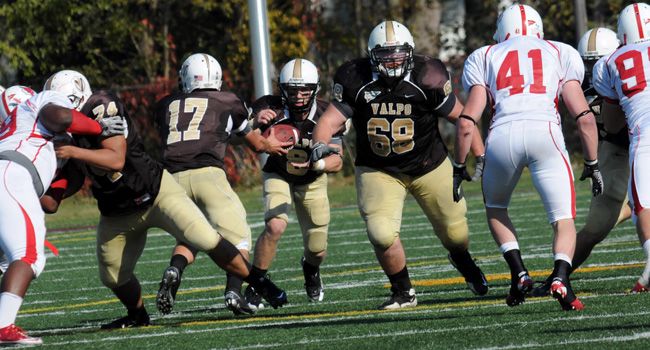 John Moriarty was one of four Crusaders honored by the PFL. (Ray Acevedo)

Four Valparaiso University football players have been named to the Academic All-Pioneer Football League Team, including two on the First Team and two more on the Second Team the conference has announced.

Soller, a senior, finished sixth on the team in tackles with 56 as a defensive back this season.  He was second at Valpo with seven tackles for loss, including 2.5 quarterback sacks.  He also recovered a fumble and broke up a pair of passes.  Soller has a 3.39 grade point average as an exercise science major, and earned First Team Academic All-District V honors this season as well.

Moriarty, a senior, started nine games for the Crusaders on the offensive line alongside Blair.  He moved into a starting role this season after appearing in just five games one season ago.  A double major in sports management and TV/radio communications, Moriarty has a 3.85 cumulative grade point average.

Bushong, a junior, made 59 tackles for the Brown and Gold on the defensive line, including 27 solo stops.  He made six tackles in the backfield, including 2.5 sacks and added a quarterback hurry.  A Honorable Mention all-PFL selection, he also intercepted a pass and broke up another.  Bushong is a sports management and finance double major with a 3.22 grade point average.

To be eligible for Academic All-PFL honors, student-athletes must be at least a sophomore with a 3.00 cumulative grade point average.  Nominees are then voted upon by the league’s sports information directors, with 11 players being chosen to both the offensive and defensive first and second teams.  In addition three special teams selections are made to each team as well.