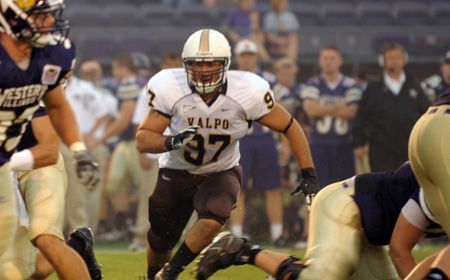 The Crusaders didn’t let the rain prevent them from playing in their annual spring game Saturday morning at Valparaiso University’s Brown Field where the Brown defeated the Gold 63-53.

With a modified scoring system using points, the offense (Gold) took on the defense (Brown).

Jabril Baker (Indianapolis, Ind./ North Central H.S.) helped the Gold to gain 23 yards with an explosive play. That was followed closely by his teammate Tony Taibi’s (Arlington Heights, Ill./Rolling Meadows H.S.) run for a touchdown, giving the Gold a 34-8 lead over the Brown.

“We’re light-years ahead of where we were,” head coach Dale Carlson said of the offense this spring. “We’ve got a better understanding of what we’re trying to do.”

Nikko Carson (Lockport, Ill/ Lockport Township H.S.) made the first big play for the defense when he recorded a quarterback sack for two points. Shortly after, Matt Osborne (Gas City, Ind./Mississinewa H.S.) and Brian Plachinski (South Milwaukee, Wis./South Milwaukee H.S.) both scored a pair of points for the Brown when they both registered sacks.

Bryce LaMore’s (Manteno, Ill./Bishop McNamara H.S.) interception for a 10-point defensive stop brought the game within one, as the Gold led 34-33.

After a four-point three-and-out, the Brown overtook the Gold for the lead. Christopher Howard (Crown Point, Ind./ Andrean H.S.) had a sack and the Brown’s fourth down stop increased their lead over the Gold to 56-43.

Taibi’s explosive 51-yard run for a touchdown and Mike Pando’s (Hamilton, Mich./Hamilton H.S.) extra point brought the score to within three. Brown finished with a three-and-out and fourth down stop to close the game with the win.

Valparaiso will open the 2011 regular season on September 3, hosting Franklin at Brown Field.  Kickoff is set for 7 p.m.