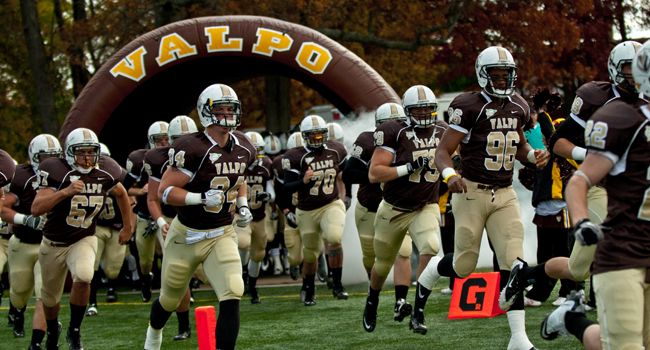 Valpo will take to the field for the spring game on Saturday. (Stacey LaCalamita)
Related Links

Valparaiso will play its annual spring Brown and Gold football game on Saturday morning at Brown Field beginning at 11 a.m.  This year’s format will again feature the offense against the defense and admission is free.

The game is the culmination of 15 days of spring practice, which head coach Dale Carlson thinks has been very beneficial for the Crusaders.

“It has been a very productive spring for us,” Carlson said.  “The teaching that we have been able to do with our young football team should show up in the fall.”

The scoring for this year’s game will be like last year, and for the offense will play like a normal game for touchdowns, PATs, and field goals.  In addition, the offense can get points for three consecutive first downs, as well as for running plays of more than 10 yards or pass plays longer than 15 yards.

The defense still scores six points for a touchdown and two points for a safety, but can also tally points for a three-and-out, fourth down stops, and creating turnovers.  The defense will also be rewarded for sacks and sudden changes where the offense gets the ball inside of the 35 yard line but does not score or is held to a field goal.

“We are much more athletic than we were last year,” Carlson added. “We have had some very good battles going for playing time, especially in the secondary and at linebacker, quarterback, and running back.”

Carlson currently has 73 players on the roster during the spring season.  The Crusaders will open the 2012 regular season on Thursday night, August 30, hosting Saint Joseph’s (Ind.) at Brown Field.  Kickoff is set for 7 p.m.