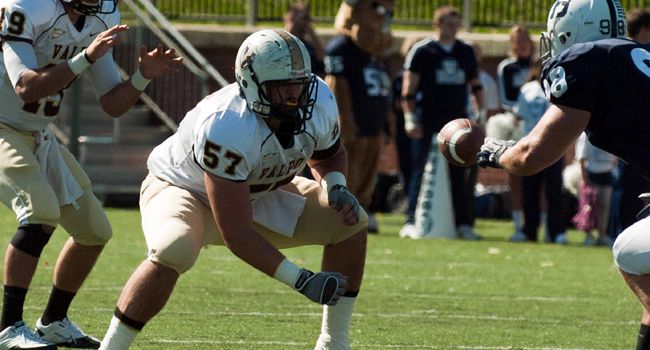 Bill Bodzianowski is one of 11 seniors being recognized Saturday before the game.

As we bid farewell to eleven senior players and one student assistant who served for four years on the medical staff, we reflect on their accomplishments on and off the field.

Baker has played in 20 games in two seasons after transferring to Valpo. A running back, he battled back from a knee injury in 2011 to average better than four yards per carry. This season, he averaged over five yards per carry. He was named offensive player of the week for his play in Week 10 He earned the team’s offensive 110% award in 2010.

Baker Jr. appeared in all but one game in his four years at Valparaiso. A defensive end, he compiled 137 tackles from 2010-2013, 58 of which were solo stops. He was named to the PFL Fall Academic Honor Roll in his freshman season.

Barlow has played in seven games as a Crusader, including two this season. A defensive lineman, he amassed eight tackles including one for a loss. Named to the PFL Academic Honor Roll in his freshman season, he also was named defensive prep team player of the week once in 2011.

Bodzianowski played in 30 games in his Valpo career beginning in 2009. He would’ve added to that total were it not for a season-ending knee injury in Week 2 at St. Joseph’s.  An offensive lineman, he was twice named the team’s offensive line player of the week last season.

Cook played in 36 career games for the Brown and Gold. A fixture at right tackle, he was named the team’s offensive line once in his sophomore season in 2010.

Derbak played in 38 games in his Valpo career. He accumulated 255 tackles, two interceptions, 21 tackles for a loss, three forced fumbles, and a sack at linebacker. Twice he was an Honorable Mention All-PFL nomination. In the classroom, he was named to the PFL Fall Academic Honor Roll twice.

Grask played in 39 games during his career with the Crusaders. A defensive back, he recorded 236 tackles – 7 ½ for a loss – in addition to three interceptions and three fumble recoveries over four seasons. His 113 tackles led the Valpo defense in 2012. In October, he was named a national semifinalist for the National Football Foundation’s William V. Campbell Trophy. In addition to being a three-time Pioneer Football League Fall Academic Honor Roll recipient, he earned Valparaiso University Student-Athlete Presidential Academic honors in 2011. This summer he was named one of three captains of the 2013 Valparaiso Crusaders.

Larson played in 27 career games for the Brown and Gold. A defensive back, he has one career interception to go along with 36 tackles. He recorded his first collegiate sack this season on October 26th at Drake. As a freshman, he was named the team’s defensive prep team player of the week once. Twice he was recognized as a PFL Academic Fall Honor Roll member. In 2011, he earned Valparaiso University Student-Athlete Presidential Academic honors.

Lewis was a three-year member of the Crusaders. In 2011, he was named the team’s defensive prep team player of the week. He also earned Valparaiso University Student-Athlete Presidential Academic honors that year. Last season, he was named to the Pioneer Football League Academic Honor Roll.

O'Bryant played in 16 games during his Valpo career after transferring from Carthage College. In 2011, he was named the team’s offensive prep team player of the week once. This season, he has caught nine passes for 76 yards including his first career touchdown reception on October 19th against Morehead State at Brown Field.

Porter, Jr. played in 39 games during his tenure at Valparaiso. A defensive back, he registered 134 career tackles with the Brown and Gold, 93 of which were solo stops.  He returned an interception 61 yards for a touchdown his junior season. He was also the team’s defensive player of the week once that year.  He was named Special Teams Player of the Week once his freshman year in addition to Pioneer Football League Fall Academic Honor Roll distinctions.

For four years, Purcell has worked alongside the medical staff in helping our Crusaders stay healthy and on the field.  He will be graduating with a degree in sports management in May.