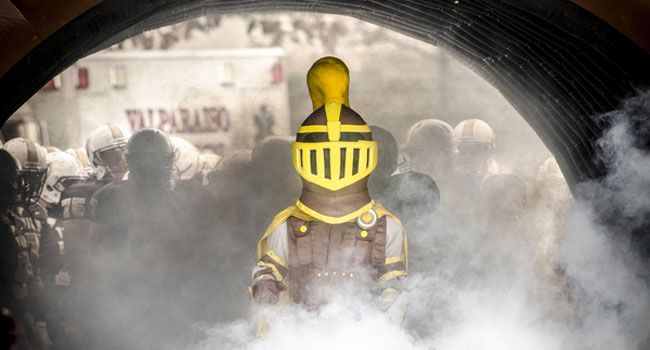 "I'm very satisfied with this recruiting class. Our number one priority was to improve on the defensive side of the football and we did at all three positions on defense," Cecchini said.

The defensive portion of the recruiting class is comprised of six defensive backs, four linebackers, and three defensive linemen.

On offense, Valparaiso welcomes three offensive linemen, a running back, three quarterbacks, two tight ends, a pair of fullbacks, and a wide receiver.

"I'm very happy with all three quarterbacks. They have a lot of potential," Cecchini remarked.

The next quarterback for the Crusaders will have the task of replacing the productivity generated by Eric Hoffman, Valpo's career passing leader with 7,221 yards.

The recruiting class hails from ten different states, led by eight recruits from Florida, four from Illinois, and three from Indiana, Georgia, and California apiece.

Cecchini expects a number of the recruits to be at Brown Field this Saturday for the Brown vs. Gold scrimmage. In a departure from years past, the exhibition will not be an offense vs. defense format; rather, the teams were selected at the behest of a leadership counsel consisting of team captains Alex Green and Jake Hutson.

"So far I've been very happy with the effort and coachability I've seen. I'm encouraged by the attitude and though there still is a lot of work to be done, we have come a long way," Cecchini said.

The scrimmage will feature four 12-minute quarters and the only modification will be the removal of punts/punt returns.

Kickoff at Brown Field is set for 11:00 am Saturday morning and admission to the event is free. The game will represent the team's 14th practice and the coaching staff will use its 15th and final practice on Monday, April 28th for a post-scrimmage evaluation/practice.