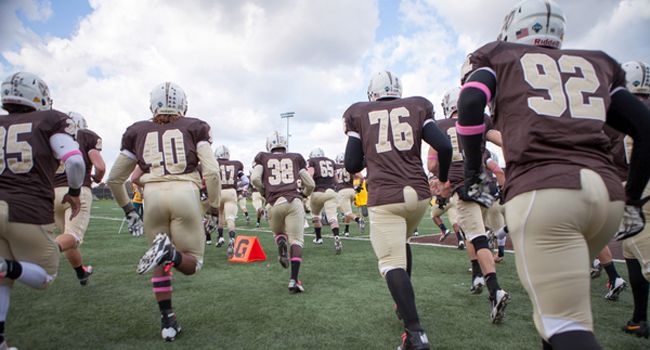 Saturday saw another rite of spring come to Valpo as the 14th Annual Brown vs. Gold game kicked off at Brown Field. With a new coaching staff in place, it gave fans a chance to see what could be an exciting team come early September. A goal-line stand by the Gold team as time expired preserved a 24-21 victory over the Brown squad.

That was shown on the very first play when Jake Hutson (Blanchard, Mich./Montabella) took the first play from scrimmage 17 yards for Gold.

It would be Brown that would find the endzone first though with freshman Grayson Bastin (Fort Wayne, Ind./Homestead) hitting pay dirt for his first of two touchdowns on the afternoon. Bastin finished with 13 carries on 102 yards and Brandon Hall (Muskegon, Mich./Orchard View) was the standout on the Gold side of the ball with three touchdowns, finishing with eight carries on 29 yards.

Junior Tanner Kuramata (Rancho Cucamonga, Calif./Claremont) stood out on special teams with several great kickoffs, the best being a 51 yard return to started the second half. Quarterback play was also solid on both sides of the ball with redshirt freshman Scott Staal (Grand Haven, Mich./Grand Haven) going 21 for 30 on the afternoon for Brown with 165 total yards. Junior Ben Lehman (Elgin, Ill./Saint Edward Central Catholic) for Gold went 16 for 27, racking up a total of 190 yards.

On the defensive side of the ball, sophomore John Guilford (Spencer, Ohio/Black River) had himself a game recording two tackles, two sacks, and the stop at the one yard line to secure the victory for Gold.

Junior Colin Burke (Orlando, Fla./Freedom) also put in a nice effort with 4.5 tackles. Junior Devan Gadson (Orlando, Fla./Freedom) had the only forced turnover, intercepting a Staal pass late in the fourth quarter. On the Brown defensive side redshirt sophomore Nick Moffitt (San Diego, Calif./Escondido Charter) had 1.5 tackles, a sack, as well as two broken up passes.

Cecchini was clearly impressed with the effort he saw out on the field, but knows more work has to be put in before the start of the 2014 season.

“It was an exciting game. That's exactly what we wanted. There were a lot of big plays. It was a very close contest. It wasn’t decided until the final play and I wanted to make sure that our kids flew around and they did that and they deserved that after working hard this past month. we were hopefully able to entertain the crowd as well”.

Talking about the offensive side of the ball, Cecchini tried to run as balanced of an offense as you can with such limited practice time, and with a new system.

“We are looking for balance and we did a good job running and throwing the football. I think without question in the first half the offense came out and executed well.” Cecchini said.

He also had much praise to give the defense which stood out in the latter half of the game.

“To the defense’s credit, they hung in there and played very well in the second half. They got a lot of three and outs, forced a big turnover, and, of course, the big goal line stand to finish the game. I think there are a lot of good things taken away from both sides of the ball, but it was great to see the defense step up in the second half and raise their level of play.”

When asked about what they need to do before their first game at Western Illinois, Cecchini talked about the little things that need to be corrected before they start playing games that count towards the official standings.

“I think there is no question that we have made a lot of strides here in the past month, and we still have a long way to go. On both sides of the ball, we still haven’t installed all of our packages so far. We still need to continue to get our level of execution raised on both sides. On special teams we had a field goal hit the uprights, we kicked two kickoffs out of bounds and we need to clean up some of those things as well,” Cecchini concluded.

The Crusaders' 15th and final practice of the spring will be held Monday afternoon. Valpo will kick off the season at Western Illinois on August 28th at 6:00 pm. The Leathernecks, an FCS scholarship program, are coming off a 4-8 2013 season.