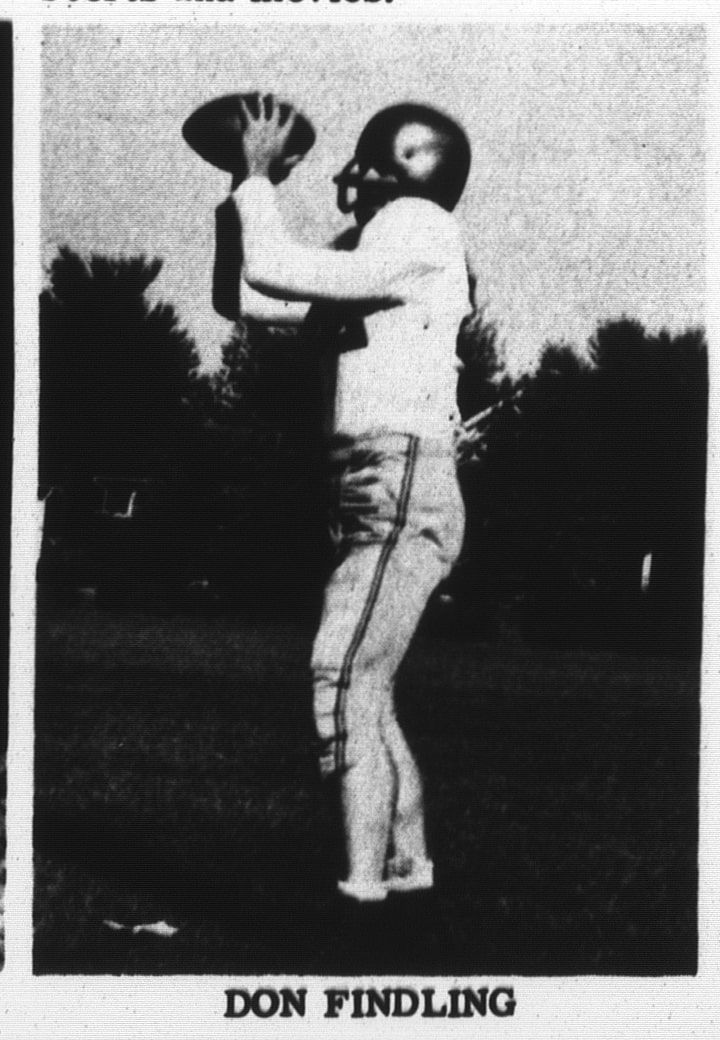 Moments before a new era of Valparaiso University football kicks off, a recognition of the program’s past will take place at Brown Field on Saturday.

As the celebration of Valpo’s centennial season begins with honoring the 1919-1949 era during Saturday’s home opener against Central Connecticut, there is no one more fitting to handle the ceremonial coin toss than Don Findling.

The 94-year-old lifelong Valparaiso resident graduated from Valparaiso University after playing for the 1947, 1948 and 1949 teams. After graduating from Valparaiso High School as the valedictorian in 1943, he served three years in World War II in both Europe and Japan, achieving the rank of army staff sergeant.

After returning from the army, Findling spent his freshman year at Indiana University. From there, he transferred to Valpo for his final three years of undergraduate studies.

“My wife-to-be was here in Valpo, so I decided to come back home,” Findling said. “My high school football teammate was playing football at Valpo and he recommended me to Emory Bauer. Coach Bauer came to my house in the summer and invited me to try out for the team, so that’s why I did it.”

Findling’s first season on the team was Emory Bauer’s second as head coach. After going 2-5-1 in 1947 and 4-5 in 1948, Valpo enjoyed a 7-2-1 season in 1949. Findling recalls a memorable season opener against Concordia (Minn.), a team coached by former Valpo head coach J.M. Christiansen. The 28-20 Valpo victory was a significant one for Bauer as it came against his former coach. Bauer played for Christiansen during his college days at Valpo, where he graduated in 1934. Christiansen led the Valpo football program from 1929-1940.

The 1949 campaign also featured a memorable ending, as Valpo defeated Wittenberg 20-0 in the Lutheran Bowl Game in Cleveland.

“It was a surprise,” Findling said. “We had finished the regular season and the coaches walked in and said, ‘We’ve got another game scheduled for you – the Lutheran Bowl.’ We went over to Ohio and won that. There used to be a single-track railroad south on Route 30, and that’s how we traveled there. I was married then, I had gotten married my first year at Valpo, and my wife came back on the train with us.”

Findling completed 21 passes for 439 yards during the 1949 season. Nine inches of snow melted on Shaw Stadium during the 48 hours leading up to the Lutheran Bowl, causing the teams to battle through muddy field conditions.

Unlike modern-day college football teams comprised of student-athletes ranging in age from 18-22, college teams of the late 1940s were filled with players in their mid to upper 20s who had served in the war.

“Almost everybody on the team was a veteran because the war had just ended and people were being discharged,” Findling said. “Veterans in their 20s were taking all of the spots on the football team, so it was difficult for younger guys to make the team. Many of us were married. In the army, we played touch football. That really helps your pass defense because you gain mobility and it teaches you quite a bit. I remember making several interceptions in college, and I think a lot of that was due to playing touch football, which was all passing.”

After playing center in 1947 and 1948, Findling transitioned to the quarterback position for the 1949 season. He was a two-way player, also playing linebacker on defense.

“I started out as a center because I had played center in high school,” Findling said. “I chose center in high school because it looked like the most available position. The person ahead of me was someone I thought I could beat out. After two years of playing center in college, they moved me to quarterback. I could pass the ball far, but not always accurately. I could throw it 60 yards.”

“Bill had a couple of bad knees, and we didn’t have any trainers at that time,” Findling said. “He would wrap his own knees and would get out to practice by the time everybody was going in. That’s how he decided he wanted to become a trainer. Bill was a very good guy.”

After graduating from Valpo with his degree in business and economics, Findling received a letter from the Cleveland Rams offering him a tryout, but he instead began his career as an account for a farm equipment dealer in Valpo. After 14 years there, he returned to the University, where he worked for 26 years before retiring as Chief Accountant.

As a Lions Club volunteer, Findling was involved in Valpo football for nearly a decade in the 1970s and 1980s as a member of the chain crew.

“The officials would compliment us on our work doing the chains,” Findling said. “At some schools, they would just pick up whoever they could find to do it, but we did it every game and knew what we were doing.”

During his many years working at Valpo, Findling established a daily routine of walking to work each morning. He would arrive at 7 a.m. and had the keys to the gym, where he would start his day by exercising.

Married for nearly 60 years, Findling and his wife Betty had three children and two grandchildren. His family is still active in the community with five generations calling Valpo home.

An individual who showed his total commitment to the University for many years will get his first look at the modern-day Brown Field on Saturday. In doing so, he’ll provide a strong link to where the program’s been as first-year head coach Landon Fox begins to carry out his vision for where it’s headed next.