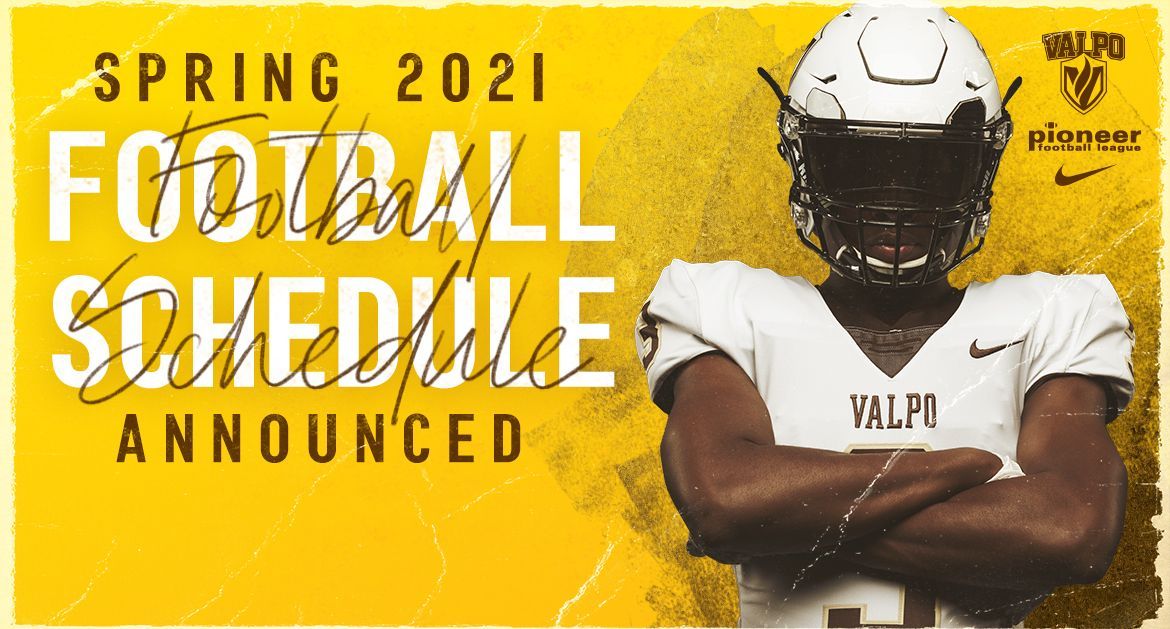 It’s a sentence that is music to the ears of Valparaiso University football fans: The 2020-2021 Pioneer Football League schedule has arrived.

After the program announced plans to play a spring schedule last month, the team has unveiled a six-game league slate that kicks off on Saturday, March 13. Student-athletes, coaches and fans alike have six Saturdays to circle on their calendar during the months of March and April.

“We are elated to have game days on the schedule and give our student-athletes the ability to look forward to competition this spring,” head coach Landon Fox said. “Grateful Saturday is one of our program’s core values, and we are grateful to have these competition dates on our schedule. Provided we can do so in a safe manner, we’re thrilled to kick off this unprecedented season in mid-March. We made positive strides as a program this fall during our practices and scrimmages, and we’re excited to showcase that in a game setting this spring.”

Before accepting the head coaching position at Valpo, Fox spent 11 seasons on staff at the University of Dayton. The second-year head coach will return to his former school for the first time since arriving at Valpo for the March 13 season opener. Valpo will welcome Drake to Brown Field to commence the home slate on March 20. March 27 is a date that alumni, fans, student-athletes and coaches will surely circle on the calendar as instate rival Butler travels north to Porter County for the PFL’s longest-standing rivalry, the Hoosier Helmet Game.

Valpo will make its way to Morehead, Ky. to clash with Morehead State on April 3 before hosting six-time defending league champion San Diego on April 10. The regular season will wrap up on April 17 at Marist, then the PFL team with the best record in the six games will earn the league’s automatic berth to the NCAA Division-I FCS Playoffs.

Start times, spectator policies and broadcast information will be released at a later date. The current schedule is aspirational and subject to change before or during this historic season, the first spring slate in the 101-year history of Valpo Football.