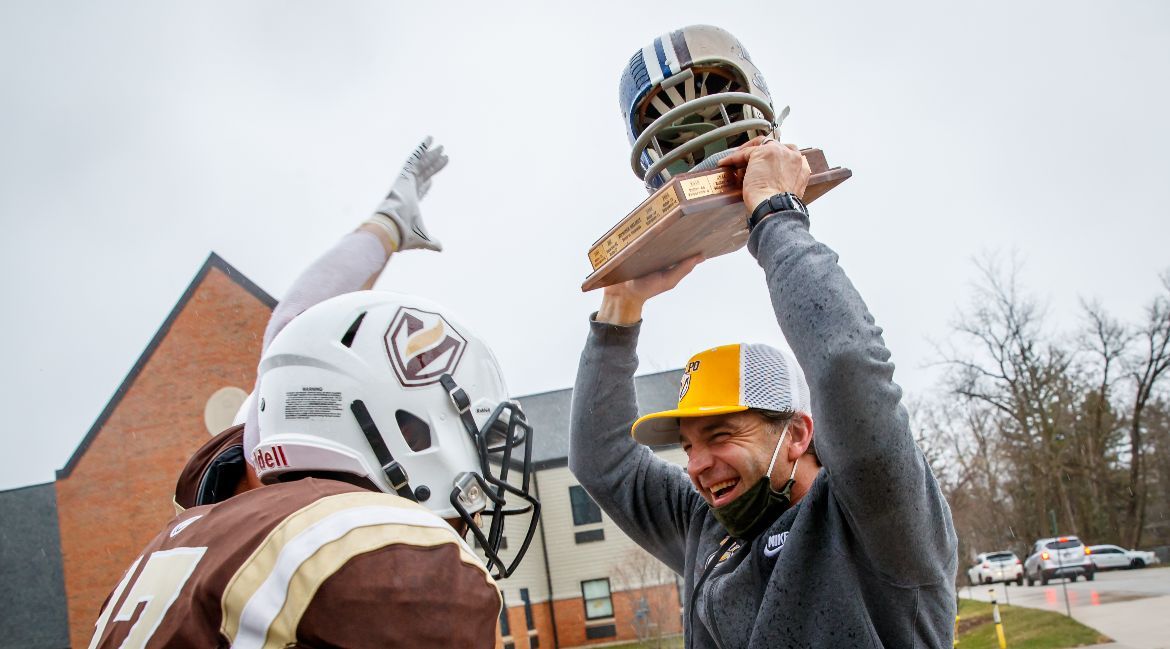 The Valparaiso University football team boasted five members of the Preseason All-Pioneer Football League Team, which was announced by the league office on Wednesday.

Peifer finished with a team-high 42 tackles including 22 solos during the six-game spring season. He accounted for 3.0 tackles for loss totaling 15 yards, made a pair of sacks, broke up two passes, forced two fumbles and was credited with a QB hurry. Peifer helped Valpo rank third in the league in scoring defense thanks to his 7.0 tackles per game, which ranked seventh among all PFL players. He was one of four players in the league with multiple forced fumbles.

Peifer had a season-high nine tackles on two occasions, the March 27 home victory over rival Butler and the April 10 game at Morehead State. He had five or more stops in all six games and had six solos in each of the two games against Butler.

Bartholomew boasted the league’s best field-goal percentage at 87.5 percent, converting seven of his eight attempts. He had the most point-after attempts without a miss in the league, going a perfect 13-for-13 on PATs. The redshirt sophomore ranked sixth in the PFL in scoring at 5.7 points per game.

Bartholomew’s season-long 49-yard field goal came at a crucial time as it represented the first points of an eventual 10-7 win over Drake, the program’s first win over the Bulldogs since 2003 and its first-ever win in Des Moines, Iowa. Bartholomew also averaged 51.6 yards per kick on 25 kickoffs, booting a pair of touchbacks. He posted Valpo’s best single-season field-goal percentage since at least 2005.

Turner finished his rookie season as the FCS nation’s true leader in takeaways with six. He recovered fumbles in Week 1 and Week 6 sandwiched around a four-game stretch of contests with an interception in Weeks 2-5. The rookie was named the co-PFL Defensive Player of the Week for Week 3.

Washington ranked eighth nationally in FCS in rushing yards per game at 108.8. He accrued 100 or more rushing yards on four occasions including a season-high 199 on 39 carries in the March 13 season opener at Butler, the highest single-game rushing output by a Valpo player since 2012. His 199-yard performance marked the ninth-highest single-game rushing number in the nation this season, and he was one of three players nationally with multiple games of 180+ rushing yards.

Washington, who totaled 653 yards and five touchdowns on 140 carries over six games, had the most rushing yards in a season by any Valpo player since Brandon Hall’s 855 in 2014 despite this year’s slate being shortened to six games. Washington was named the PFL Offensive Player of the Week once and earned a pair of College Sports Madness PFL Offensive Player of the Week nods. In addition, the Valpo running back ranked 11th nationally in total rushing yards and 12th in all-purpose yards per game (129.33).

Niesner booted seven punts for 50+ yards this season including a career-long 72 in the season finale vs. San Diego. He pinned the opposition inside the 20 on nine occasions while totaling 1,351 yards over his 31 boots. Niesner earned a pair of PFL Special Teams Player of the Week accolades this past spring.

After finishing with the program’s highest winning percentage since 2003 in Spring 2021, head coach Landon Fox’s team will embark on the fall slate on Sept. 4 at Indiana Wesleyan before PFL play gets underway on Sept. 25 at Drake. The home opener is slated for Sept. 18 vs. Dartmouth.

competition. (Dayton and Marist student-athletes from 2019 all others from 2020 All-PFL Teams). PotY-2020-21 Player of the Year (Offensive, Defensive

or Special Teams), FRotY- 2020-21 Freshman of the Year (Offensive or Defensive).