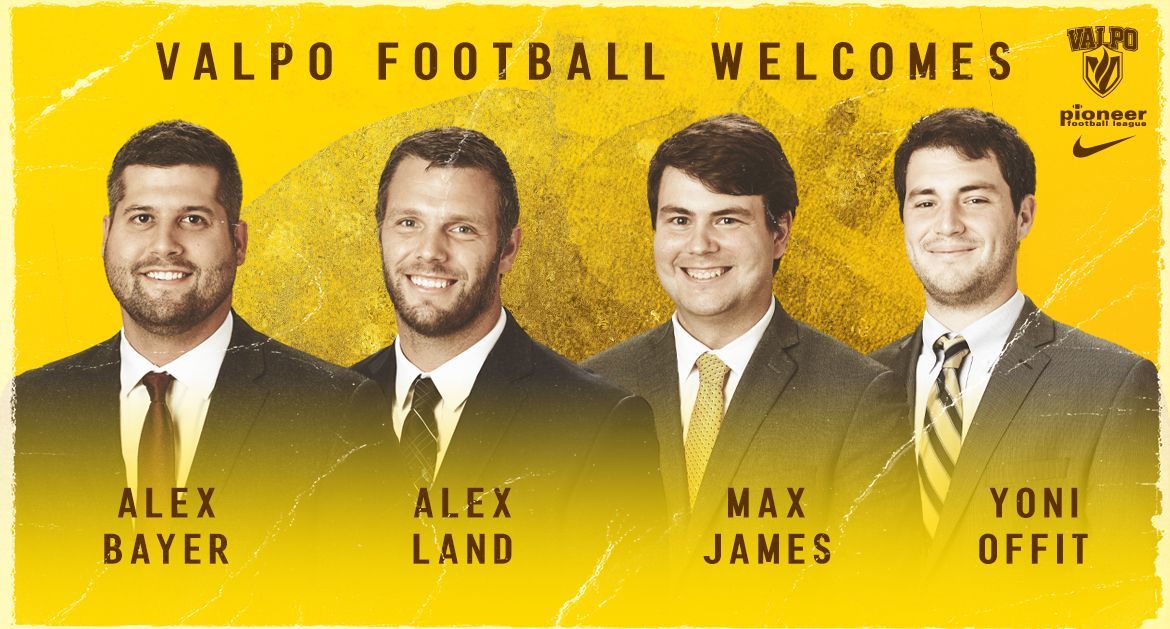 The Valparaiso University football program has announced four new members of its coaching staff for the Fall 2021 season.

Bayer, who was a member of the St. Louis Rams active roster from May 2014 to August 2015 and the San Diego Chargers practice squad from September 2015 to January 2016, will serve as the program’s tight ends coach and special teams coordinator.

“We’re excited to have Alex join our staff,” Fox said. “He will be instrumental in our special teams and will also coach our tight ends. He will be able to share significant knowledge after playing the position at the highest level and share his experiences from the NFL with our players. He also understands the academic piece and the importance of academics for our student-athletes.”

“I am extremely grateful to be joining Coach Fox’s staff here at Valparaiso University,” Bayer said. “What Coach Fox and his staff have been able to accomplish in his first two seasons is nothing short of exceptional. I look forward to working alongside this staff and continuing to build upon their newfound success. One of the biggest pleasures of being a college coach is being able to mentor and develop student-athletes to their maximal potential and watch them transform into incredible young men, both on and off the field. My family and I are excited to start a new chapter at Valparaiso University.”

James has assumed the position of Valpo running backs coach after spending time on staff at the University of Tennessee from 2019-2021 as a graduate assistant who worked with quarterbacks and wide receivers.

“Max brings a deep offensive knowledge to our coaching staff,” Fox said. “He went to college at Xavier, which is a program that we want to emulate in a lot of ways. We want people on our staff who have been around winning programs, and Max fits that desire perfectly.”

James was the offensive coordinator and quarterbacks coach at Cincinnati Christian University from 2017-2019 and served as an offensive coach at his alma mater, St. Xavier High School in Cincinnati, from 2011-2017. He was on staff at St. Xavier for an Ohio Division I state championship in 2016.

“I’ve encountered Coach Fox while on the recruiting trail over the years and have always been impressed by his focus on the players as people and their individual potential and development,” James said. “He has an excitement for the game that is infectious, so when the running backs position opened up on his staff, I immediately applied. I’m grateful to be here and am ready to get to work.”

Land will instruct Valpo’s defensive tackles after previously serving as the offensive quality control coach at UC Davis this past spring.

“Alex comes from a successful program and will bring an offensive perspective to our defensive staff,” Fox said. “He understands what the other team is trying to do offensively and how that relates to what we need to accomplish with our defensive line. His playing and coaching background enticed us to add him to our staff, and he understands the priority that we place on academics.”

During his playing days, Land was the starting guard for the Cleveland Gladiators of the Arena Football League in 2017. He also started on the offensive line for the Salt Lake Screaming Eagles of the Indoor Football League for six games in 2017 prior to signing with the Gladiators.

A four-year letter winner at Weber State, Land played in all 46 games from 2011-2014 and started every game from 2012-2014. He was one of five offensive linemen to be selected to the Weber State All-Decade Team.

“I am very excited to join a great staff here at Valpo,” Land said. “I was impressed by the improvements this team has made in a short period of time and hope to contribute to more success. I am glad to be a part of this competitive team in a competitive league. So far, the players have worked their tails off and have a great attitude. I’m looking forward to what the future holds for this program.”

Offit joins Fox’s staff to handle defensive quality control after graduating from Syracuse University with a degree in sports management in 2021.

“We’re very excited to have Yoni on staff,” Fox said. “He’s a go-getter. He wants to get things done and he’s going to try to do it to the best of his ability. He has a strong willingness to learn and has a passion for coaching and college football. He has a vision and knows exactly what he wants to do.”

“I feel extremely blessed to be joining Coach Fox and his staff for the 2021 season,” Offit said. “I am very lucky to have found a home in Valparaiso to jumpstart my coaching career. I look forward to learning and growing alongside the Valpo staff in the coming season.”

After joining Fox’s staff in 2020-2021, Ghilarducci has been promoted to a full-time role as defensive line coach beginning with the Fall 2021 campaign.

“RJ spent the last year and a half proving that he deserves this opportunity,” Fox said. “He does a great job building player relationships. The players not only respect him, but enjoy being around him. That’s one of the most important aspects of our program. We want this to be a great experience, and he has the ability to push the players very hard and the ability to relate and have relationships with them. He understands recruiting in this conference and has a strong academic background.”

Ghilarducci joined the Valpo football staff as nickelbacks coach for the 2020-2021 season after previously spending three seasons at the University of San Diego, where he was part of three Pioneer Football League championship teams. He was part of the first nonscholarship program to win a playoff game in FCS history. Prior to San Diego, Ghilarducci worked as a defensive line coach and outside linebackers intern at the University of Oregon, where he graduated with a bachelor’s degree in political science in 2015.

“I am extremely proud and honored to be elevated to defensive line coach,” Ghilarducci said. “Coach Fox has created a culture in this program that is unlike any I’ve been around. He allows players and coaches to truly be themselves and utilize their individual skills and personalities to be successful. The players are incredible young men who have bought in and are hungry to improve and win, but more importantly they truly care about each other on and off the field. We were able to have a historic season last year, but we are just getting started. I’ve never had more fun as a coach and I feel blessed every day to be a part of this team.”

Fox will instruct the team’s safeties, while defensive coordinator Brian Dougherty will also serve as the linebackers coach this season. Brad Bustle has added run game coordinator to his responsibilities as offensive line coach.

Valpo is coming off its best winning percentage since 2003 and will kick off the Fall 2021 season on Saturday, Sept. 4 at Indiana Wesleyan.

What They’re Saying About Coach James

Joe Osovet, Former Tennessee Tight Ends Coach: “Max has an amazing ability to relate to today’s student-athletes. He has a high football IQ combined with a tireless work ethic on and off the football field. The Valpo football program just got better with the addition of Max James.”

Trevor Zeiders, Point University Defensive Coordinator: “Max is a very bright and up-and-coming coach. He is passionate about the game and wants to be the best. He is willing to work diligently to improve and make those under and around him better.”