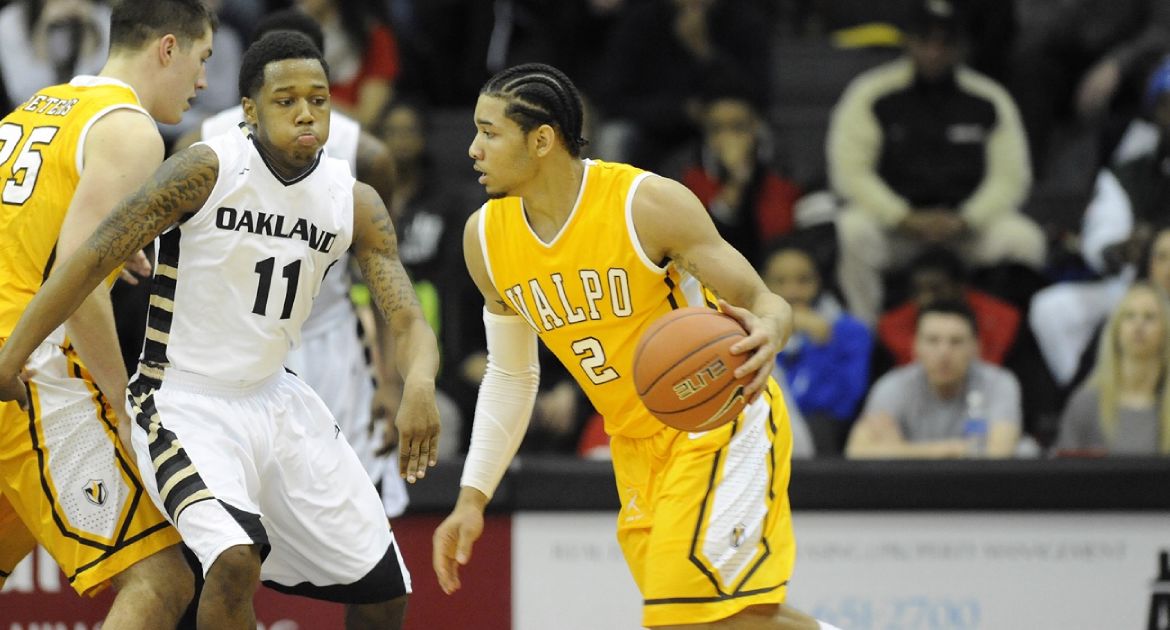 The Valparaiso men’s basketball team rallied from a 16-point first-half deficit in its Horizon League opener Friday evening in Rochester, Mich. and claimed a seven-point lead with less than four minutes to play, but this chapter in the Crusaders’ rivalry with Oakland would go the Golden Grizzlies’ way, as Oakland eventually won 89-75 in overtime.

Valpo erased most of the 16-point deficit before halftime, going into the break trailing by just five points, and hit at a 53% clip from the field in the second half, shooting 17-of-31.  Defensively, the Crusaders held Oakland to just eight field goals on 33.3% shooting in the second half, but the Golden Grizzlies were sent to the foul line 19 times in the period, making 15, to allow them to stay in the game.

The Crusaders trailed the Golden Grizzlies 55-50 with 7:30 to play after a pair of free throws from Kahlil Felder, but junior Keith Carter (Maywood, Ill./Proviso East [Saint Louis]) hit a 3-pointer to cut the lead to two points.  After an Oakland free throw, sophomore Jubril Adekoya (Tinley Park, Ill./Andrew) found classmate Alec Peters (Washington, Ill./Washington) underneath following an offensive rebound for a layup, and on the Crusaders’ next trip, Peters converted a putback himself, giving Valpo its first lead at 57-56 with 5:34 remaining.

Freshman Tevonn Walker (Montreal, Quebec/Vanier College) then made a big play, coming up with a steal and taking it coast-to-coast while being fouled for a three-point play, making it a four-point Crusader lead.  Felder hit a pair of free throws for Oakland, but Carter answered with a mid-range jumper, and then after a miss by Oakland, came back down and drilled a 3-pointer, the latter basket capping a 15-3 run and giving Valpo a 65-58 edge with 3:51 to play.

But the Golden Grizzlies would hit 3-pointers on each of their next two possessions to quickly cut the Crusader lead to one point.  A pair of free throws from Jalen Hayes gave Oakland the lead at 66-65 with 1:30 to go, until Walker connected on a triple with 1:18 remaining to put Valpo on top 68-66.  The Golden Grizzlies responded with a second-chance triple from Nick Daniels to re-claim the one-point lead.  Oakland would split two pairs of free throws in the final 30 seconds, and Valpo took full advantage, as Carter knocked down a 3-pointer from just left of the top of the key with 9.9 seconds to play to tie the game at 71-all and force overtime.

Overtime would not go Valpo’s way, however.  The Crusaders took a brief lead on a driving basket from Walker 36 seconds into the extra session, going ahead 73-72, but the Golden Grizzlies got a basket from Hayes on their next possession to take the lead for good.  Following Walker’s basket, Valpo missed eight straight shots – five of which came with it a one-possession game – while Oakland was 4-of-6 from the floor and 10-of-14 from the foul line in overtime.

Walker paced the Crusaders with a career-high 22 points, going 8-of-13 from the floor.  Carter added 18 points, including four 3-pointers.  Sophomore Alec Peters (Washington, Ill./Washington) grabbed a team-high 10 rebounds as Valpo out-rebounded Oakland 44-38, but was limited to just seven points on 3-of-11 shooting offensively.  Valpo was just 7-of-27 as a team from behind the 3-point line in the losing effort, and the Crusaders were also sent to the foul line just 12 times, making six.

Meanwhile, Oakland (5-10, 1-0 Horizon) made six fewer shots from the field than the Crusaders, but got sent to the foul line 41 times, making 30.  Valpo was tagged with 28 fouls, as two Crusaders fouled out and three others finished with four fouls, while Oakland was called for just 12 fouls.  Felder led all players with 32 points as he went 19-of-24 from the free throw stripe, and Hayes added 16 points – including a 6-of-7 mark from the line - and eight rebounds.

Valparaiso (13-3, 0-1 Horizon) has a quick turnaround as it looks to claim its first league win of the season, hosting Youngstown State at the ARC at 1:35 p.m. on Sunday.  As always, all the action can be heard live on the Valpo Sports Network and seen live on the Horizon League Network via ESPN3.com.  Links for the live audio and video, as well as live stats, will be available at ValpoAthletics.com.