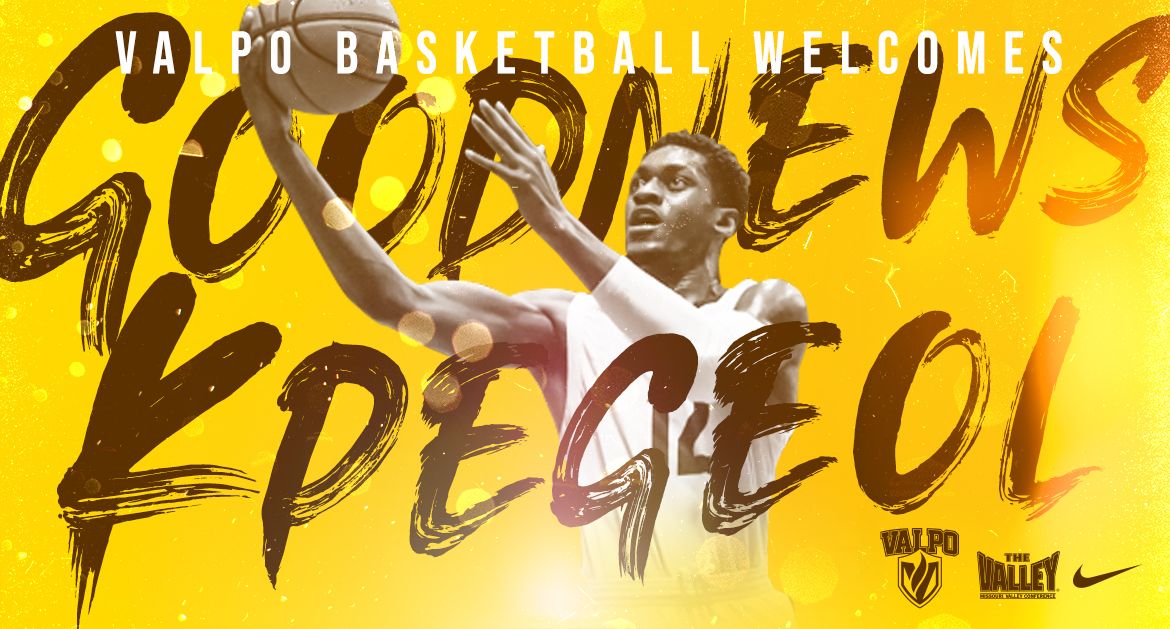 A 6-foot-6 shooting guard, Kpegeol comes to Valpo as a junior college transfer after spending the 2019-20 season at Southwest Mississippi, where he averaged 12.0 points, 5.8 rebounds and 2.6 assists per game. He will be a redshirt sophomore in 2020-21 and have three seasons of eligibility.

“Goodnews is a player we’ve know about for several years,” Lottich said. “We’ve been watching him since high school and seen the vast amount of improvement that he has made. He’s been blessed with a lot of physical attributes and athleticism. His work ethic has allowed him to improve his skill. We’re excited about a young man with three years of eligibility who has experience and versatility. He has the ability to be an elite defender and can make an impact in a variety of ways on the offensive end.”

Kpegeol was a four-year letter winner at North High School in St. Paul, leading his team to a 22-5 overall mark and 15-1 conference record as a senior. He averaged a team-best 18.2 points per game over 19 contests during the 2017-18 campaign, his senior year. He surpassed 20 points on nine occasions. During his sophomore season, Kpegeol’s school made its first trip to the Class 4A State Tournament in 17 years and finished with a 24-6 mark.

“I’m really excited about the culture at Valpo,” Kpegeol said. “Coach Lottich was direct and honest in his conversations with me during the recruiting process. He told me exactly what he wants from me and what my role will be in the program. He was willing to tell me both negatives and positives, and I like that in a coach.”

After his four-year high school career wrapped up, Kpegeol spent postgraduate time at Taylor Made Prep in Pensacola, Fla., where he averaged 15.6 points, 5.6 rebounds and 4.2 assists per game. He was rated among the Top 100 shooting guards (No. 71) in the country and was the No. 27 prospect in Florida, according to 247Sports.com.

After starting the 2018-19 season at Taylor Made, Kpegeol made his way to Kansas State at the semester break and sat out the remainder of the campaign. At the conclusion of the season, he transferred to Southwest Mississippi.

“Signing with Valpo means a lot to me,” Kpegeol said. “I sat there and stared at the paper for a good five minutes. I want to show Valpo fans that they’re getting a player who works hard and wants to go out and compete every day. I’m going to put my body on the line and do everything I can to help us win games.”

“They all complement each other extremely well,” Lottich said. “Sheldon has been more of a perimeter scorer who can score in a variety of ways at the rim. He can shoot behind screens and has done that well and efficiently. Connor has a lot of similarities to Ryan Fazekas with an ability to get 3s off and make them at a high clip. Combine that with unique competitiveness and toughness and it makes Connor a valuable addition. Jacob is an inside and outside presence. He’s one of the best rebounders we identified in this recruiting class. We like his versatility and he’s used to winning. We’re thrilled to add Goodnews to our incoming class and combine that group with our returning players for the 2020-21 season.”