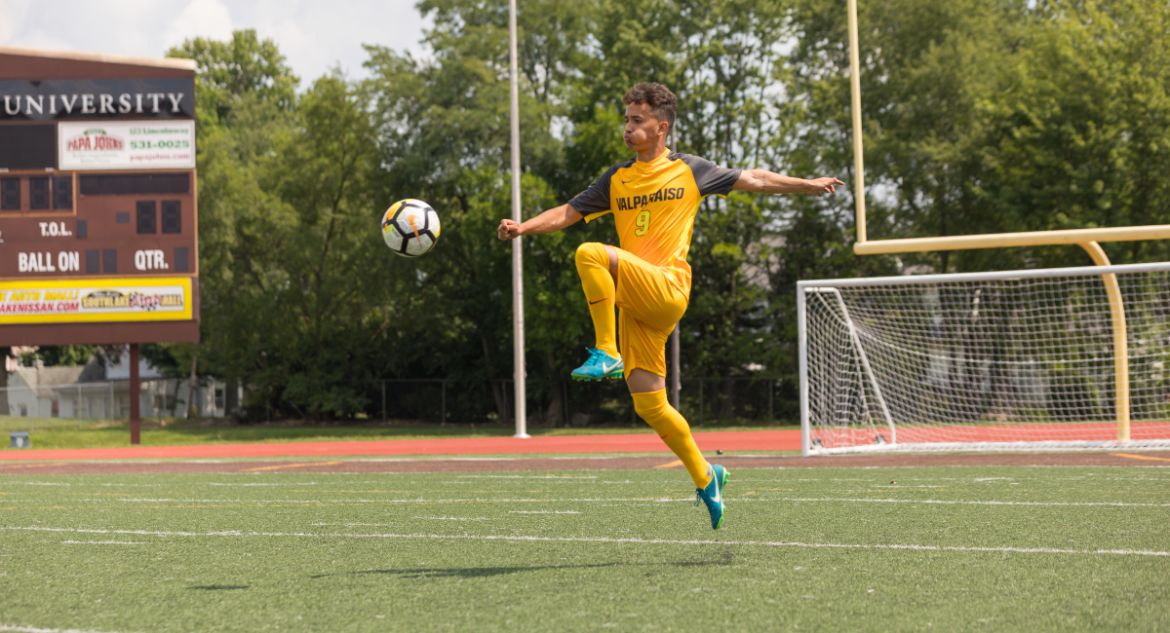 Lucca Lacerda had both a goal and an assist on Wednesday.
Valparaiso at Eastern Illinois | October 10, 2018

The weather conditions weren’t favorable, but the outcome sure was for the Valparaiso University men’s soccer team on Wednesday in Charleston, Ill. Valpo came away with a 2-1 road victory over host Eastern Illinois behind a late goal by Lucca Lacerda (Passos, Brazil / Mercy College), whose game-winner came in the 85th minute.

“I want to thank the coaches and staff at Eastern Illinois for all their efforts to get the game in. There’s been a lot of rain in the area all day, including a pretty heavy downpour right before halftime, and the quick work to get the practice field up and running so we could finish the game safely is commendable and doesn’t go unnoticed by me or my players.”

“It was actually a pretty good game given the conditions, and I’m proud of the spirit we’ve shown. Ignoring outcomes and just keeping your head down and working through tough patches is not as easy to do as it sounds. My team has done that, and it feels as if they are now seeing the rebound. We have the capacity to be a dangerous team that can make a run at a league title, and the next four games will set that stage. We are excited to head into Bradley with a little momentum because we know they are a very good team and we will have to be at our best.”

Valpo (3-7-2) will return to Valley action on Saturday night with a visit to Shea Stadium in Peoria, Ill. to battle the Braves. A link to live stats is available for the match, which kicks off at 7 p.m. CT.