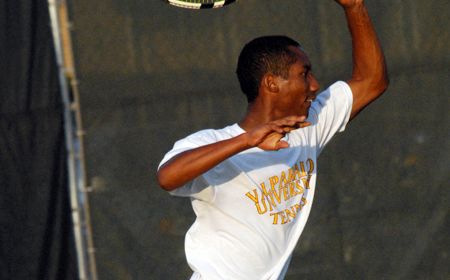 Valparaiso concluded its run at its own Valpo Fall Classic on Saturday, playing in one singles and five doubles matches on the day at the Valpo Tennis Complex.

“It’s nice to play a lot of close matches, but at the same time it would be nice to come out with some wins,” head coach JimDaugherty said.

Adam Whitmer (Shipshewana, Ind./Westview H.S.), the lone Crusader still in the singles draw, had a hard fought semifinal match of the C flight before falling 7-5, 6-3 against Michael Koscielski of Dayton.

Whitmer also teamed in doubles with Philip Dresden of Dayton to reach the final of the C flight.  In the championship against Mike Wesley and Brian McCarthy of Green Bay, the duo fell 8-4.

Kyle Stump (Plymouth, Ind./Plymouth H.S.) and Phidias Fortune (San Antonio, Texas/Madison H.S.) lost their semifinal match in the B flight of doubles 8-4 to Eric Plaushines and Brian Zaron of Green Bay.  They then came back and fell in a tie-break 9-8 (5) against the UIC tandem of Bastian Harbo and Tim O’Brien in the third place match.

In A doubles, Alex Lau (Bloomington, Minn./Jefferson Senior H.S.) and Kevin DeHerrera (Littleton, Colo./Chatfield H.S.) dropped their consolation match against Danny Wilson and Nate Kirk 8-3.  They then dropped a 9-7 decision against Matt Clegg and Matt Keesey of Green Bay in the seventh place match.

“Each year this tournament continues to grow,” concluded Daugherty.  “The quality of competition gets better and better.”

Valpo will return to the courts next weekend in Muncie, Ind. for the Ball State Fall Invitational.  Friday’s action is slated to begin at 7:30 a.m. CDT.