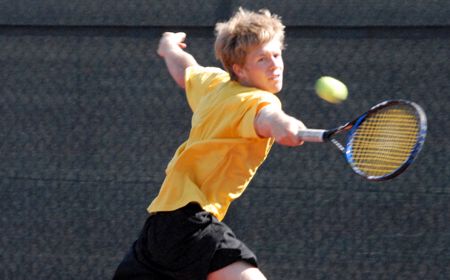 Adam Whitmer (Shipshewana, Ind./Westview H.S.) won for the second straight day in singles, but it was not enough as Valparaiso dropped its first home outdoor match of the season on Wednesday, 6-1 to UIC at the Valpo Tennis Complex.

The Flames added to the lead in singles as Kirk posted a 6-1, 6-2 victory over Fortune at the number six spot.  Whitmer cut the Valpo deficit in half with his 6-4, 6-1 triumph over Wilson at fourth singles, before UIC came back with wins to secure the match.  Liccardo was a 6-1, 6-2 winner over DeHerrera at the third spot while Robare topped Stump 6-1, 6-4 at number five.  Hudson defeated Litscher 6-2, 6-3 at second singles while Lau fell 6-4, 6-2 against Lystad at the top of the lineup.

“I think we’re starting to compete better,” head coach Jim Daugherty said.  “We still need to get better at converting big points though.”

Valparaiso (3-9, 0-2) will return to the Valpo Tennis Complex on Friday morning as the Crusaders host Detroit in another Horizon League match.  First serve is set for 10 a.m.