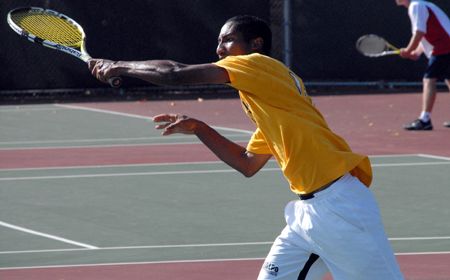 Despite losing the doubles point, Valparaiso rallied in singles play, winning at the third through sixth spots in the lineup to defeat Green Bay 4-3 on Saturday morning at the Valpo Tennis Complex to notch its second Horizon League win in as many days.

The Crusaders came out strong in singles though, winning the first four matches that were decided to earn the victory, three in straight sets.  Stump tied the match at one as he downed Keesey 6-4, 6-2 at the fifth spot and Whitmer followed at number three singles defeating Plaushines by the same score.  DeHerrera made it 3-1 Valpo with his number four singles win against Jess, also 6-4, 6-2 and Fortune clinched the match for the Brown and Gold with a three set win, 6-2, 2-6, 6-1.

Swanson defeated Litscher 7-6 (2), 6-3 at number two singles while Clegg was a 7-5, 7-5 winner against Lau in the final two matches of the day for Green Bay.

“I’m proud this team’s fighting spirit after losing a close doubles point,” head coach Jim Daugherty said.  “They came back to battle for the victory.  Whitmer has really made a big impact lately, stepping up and winning five in a row.  All around it was just a good weekend for this team.”

Valparaiso (5-9, 2-2) will close out its five-match homestand, as well as the home season, on Wednesday afternoon with a 3 p.m. match against Butler at the Valpo Tennis complex.