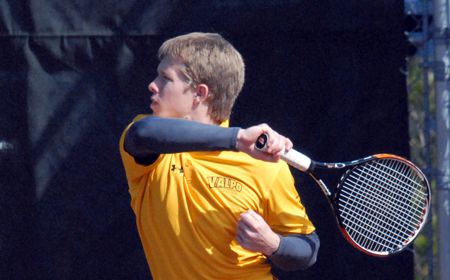 Adam Whitmer led his match when it was stopped. (Ray Acevedo)
Related Links

“Unfortunately the score is deceiving as it doesn’t show how well we played in the other matches that didn’t get completed,” Valpo head coach Jim Daugherty said.  “I’m really proud of how hard the team fought.”

Valparaiso (6-12), the tournament’s sixth seed, will return to action on Saturday afternoon in the consolation draw to face Detroit, the seventh seed at 3:30 p.m.