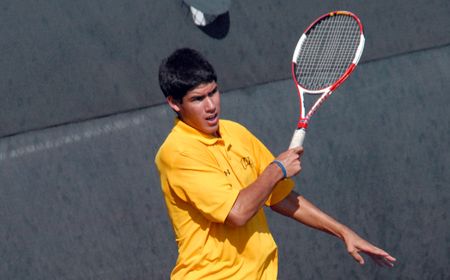 Playing their lone dual match of the fall season, Valparaiso won all eight matches played on Wednesday afternoon as the Crusaders defeated Saint Joseph’s (Ind.) 7-0 at the Valpo Tennis Complex.

“It was great to see the guys get off to a good start,” head coach Jim Daugherty said.  “It was even better to see the way they maintained their mental toughness throughout the match.”

Playing singles first, the Crusaders started strong and did not let up.  Kevin DeHerrera (Littleton, Colo./Chatfield H.S.) started the Crusaders off with a 6-0, 6-1 victory at number two singles over Miguel Belcina and Kyle Stump (Plymouth, Ind./Plymouth H.S.) followed with a win at the fourth spot over Roger Michels by the same score.  Siddarth Mehta (South Bend, Ind./Clay H.S.) made it 3-0 Valpo with a 6-1, 6-1 triumph over Michael Goetz at fifth singles.

Carlton Lyons (South Bend, Ind./Clay H.S.) secured the victory with a 6-2, 6-2 win over Matt Slawson at the sixth spot while Adam Whitmer (Shipshewana, Ind./Westview H.S.) won 6-2, 6-1 against Tanner Braden at third singles.  Tom Litscher (Eau Claire, Wis./Memorial H.S.) completed the singles sweep with a win in a two-hour match, 6-3, 5-7, 11-9 against Ishan Gohill at the top of the order.

Valpo added two more doubles wins as Mehta and Lyons were 8-5 victors over Goetz and Slawson at number three while Whitmer and Stump topped Braden and Michels 8-3 at the second spot.  First doubles was not played due to daylight.

Valparaiso will return to the courts on Friday morning for day one of the Ball State Fall Invitational.  First serve is set for 8 a.m. CDT in Muncie, Ind.