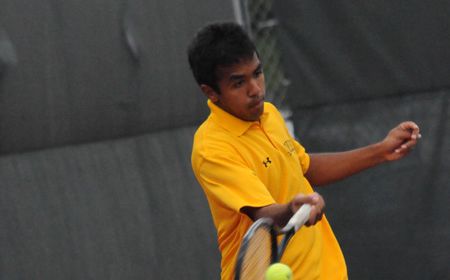 Valparaiso opened the 2010 spring tennis season on Saturday, competing in the first day of the Boilermaker Invitational held in West Lafayette, Ind.

Mehta then faced Western Michigan’s Brad Noel in a singles contest, forcing a tie-break for the third set before suffering a 6-0, 1-6, 10-4 setback.

Valpo faced Eastern Kentucky in the second singles contest of the day, picking up several sets wins, but was unable to win a match.  Litscher, again at the top spot, fell to Alex Das Izquierdo 6-1, 6-2 while Whitmer dropped a 7-6 (6), 6-4 contest against Hugo Klientovsky at number two.  Parul Verma was a 7-6 (5), 6-2 victor over Baum at third singles while Carlos Pons beat Stump 6-4, 4-6, 10-8 in a tie-break for the third set.  Phil Janz downed DeHerrera 6-4, 6-2 at number five while Emilio Perez topped Woodson 6-3, 6-1 at the bottom of the lineup.

“I think the theme with both singles matches was that we competed until the middle or end of sets, but against Purdue let them slip away,” head coach Jim Daugherty said.  “Against Eastern Kentucky we were better, and won a couple of the sets.  We just need to get tougher.  Overall we’re competing well for this time of year though, and it is something we can build on.”

Valparaiso will return to the courts on Sunday morning to complete the final day of play at the Boilermaker Invitational.  The day’s matches begin at 8 a.m. CST.