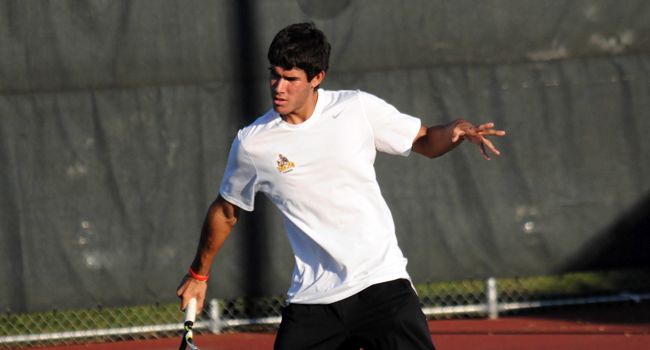 Eric Honert (Arvada, Colo./Ralston Valley H.S.) and Kevin DeHerrera (Littleton, Colo./Chatfield H.S.) both registered singles wins for Valparaiso on Saturday morning but the Crusaders dropped a 5-2 decision to IUPUI in a neutral site match held at the Boylan Tennis Center in Rockford, Ill.

Honert won his fourth straight match, and team-leading 10th singles contest of the year, with a 4-6, 6-4, 10-8 victory over Luke Bielawski at the second spot in the order.  DeHerrera also had to battle back after dropping the opening set before downing Joel Modesitt 5-7, 7-6 (5), 11-9 at number three singles.

“Eric continues to play well for us,” head coach Jim Daugherty said after the match.  “Kevin really had to pull deep today to win his match, battled back from behind, and got it done.”

“This is the best IUPUI team I have seen in years,” Daugherty added.  “We played well but we couldn’t close out a couple of sets, especially in doubles.”

In doubles action, Honert and DeHererrawere 9-7 winners over Modesitt and Volz at the second spot but the Jaguars won each of the other two contests.  Bielawski and Patrick O’Neill defeated Baum and Whitmer in a tie-break at the top spot 9-8 (7) while Thomas Gans and Shafer topped Woodson and Siddarth Mehta (South Bend, Ind./Clay H.S.) 8-3 at number three doubles.

Valparaiso (2-3) will return to the courts on Friday afternoon, traveling to Kalamazoo, Mich. to face Western Michigan.  First serve is set for 12 p.m. CST.