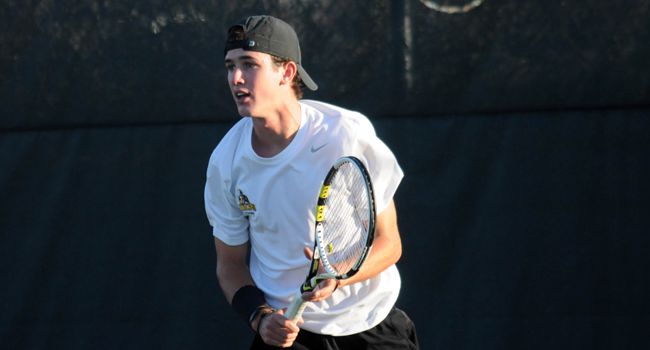 The Valparaiso men's tennis team took wins in 18 of its 20 matches on Friday afternoon as the Crusaders hosted day one of the Valparaiso Invitational at the Valpo Tennis Complex.

Both of Valpo's representatives in Flight A of singles won a pair of matches in straight sets to move into the flight's semifinals. Freshman Michael Savaglio (Kenosha, Wis./Mary D. Bradford) moved into the semis by defeating Ben Yue of Western Illinois (6-1, 6-2) and Camilo Giraldo of Olivet Nazarene (6-1, 7-5). Meanwhile, junior Eric Honert (Arvada, Colo./Ralston Valley) downed Jon Kaasa of Goshen (6-4, 6-2) and Patrick Hammers of Western Illinois (6-2, 6-0).

All four of Valpo's double squads earned victories on Friday as well, as one round of doubles play closed the day's action. In flight A, Honert and Waak teamed up for an 8-1 win over Matt Kuntzi and Manny Eudave of Roosevelt. In flight B, Baiocchi and Oakes earned an 8-3 victory over Vasanth Palanisamy and Krishnan Ganesan of Goshen. In flight C, Hart and Savaglio teamed to win 8-1 over Jordan Lingle and Mat Bowden of Olivet Nazarene, while Hickey and Etman posted an 8-0 win over Dan White and Rory Stewart of Roosevelt.

The final day of the Valparaiso Invitational begins Saturday morning at 9 a.m. with the last two rounds of doubles play. The final two rounds of singles action will follow from the Valpo Tennis Complex.