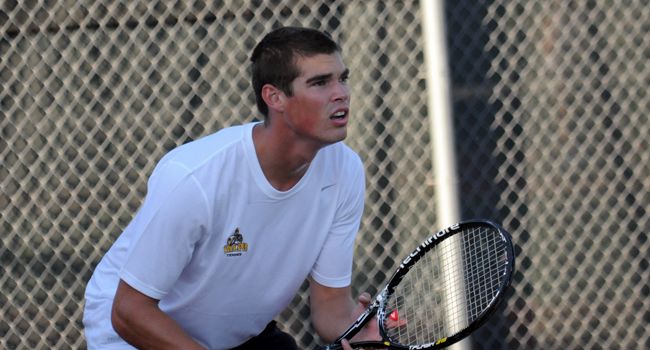 It took the Valparaiso Crusaders less than 24 hours to get back into the win column as they took a tight 4-3 match from the Dayton Flyers Saturday afternoon at the Boylan Tennis Center in Rockford.

Similar to its season opener versus Western Illinois, the doubles point proved to be the game-winner for Valpo.

Senior Chris Baum and freshman Danny Oakes made quick work of Robert Salcedo and Andrew Hanley at No. 2 doubles, winning their match 8-2.  The freshmen duo of Michael Savaglio and Michael Baiocchi clinched the doubles point at No. 3 when they took a hard-fought 8-5 win over Josh Malyon and Colin Bernier.  The No. 1 team of junior Eric Honert and freshman Lucas Waak were a point away from winning their doubles match when the match was stopped.

With the 1-0 advantage, the Crusaders needed just three singles victories to take the match.

After taking the first set 6-4, Savaglio needed just one of the next two sets to clinch the win for Valpo.  But Josh Malyon battled back and took both sets to tie it up at 3-3.

With the Crusaders' fate resting on the shoulders of Brian Hickey, the freshman delivered with a 7-6 (7-5), 6-4 triumph.

With the 4-1 record, Valpo will get a week off before heading to Northwestern (7-1) to challenge the 34th-ranked Wildcats in Evanston.  The match is scheduled for 7:30pm Saturday.