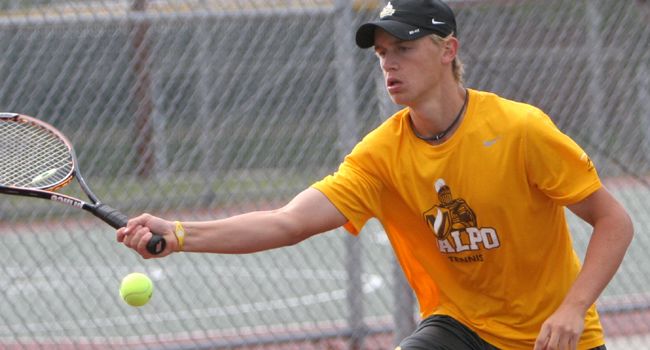 Lucas Waak was the B singles flight champ Saturday at the Valparaiso Fall Invitational.

The Valparaiso Fall Invitational concluded Saturday afternoon with five of the six flights going the way of the hosts.

Valpo made it a perfect 3-for-3 in doubles play thanks to an 8-2 victory from sophomores Michael Savaglio (Kenosha, Wis./Mary D. Bradford) and Brian Hickey (Western Springs, Ill./Fenwick) in the Flight C doubles championship tilt over Olivet Nazarene's duo of Alef Guimaraes and Riley St. Clair.

In singles play, freshman Jeffrey Schorsch (Perrysburg, Ohio/Perrysburg) suffered a semifinals defeat to Huntington's Vlad Khudziy 1-6, 6-2, 10-5 in the A flight. In the other semifinal match, Bacalla also dropped his match after winning the first set. The veteran Eric Honert (Arvada, Colo./Ralston Springs) rallied past the rookie 1-6, 6-4, 10-8. Honert was down 8-4 in the third set tiebreaker before winning the final six points.

Dunn and sophomore Lucas Waak (Manitowoc, Wis./Roncalli) both won their semifinal matches in three sets in Flight B singles to set up an all-Valpo final.

Waak took the first set 6-3 before yielding the second set by the same 6-3 score, forcing a third-set tiebreaker. Experience proved key as the sophomore edged the freshman 10-7 in the final set.

In the C flight, Emhardt made quick work of Cardinal Stritch's Donnersson Penna 6-3, 6-1 in their morning semifinal match. Teammates Hickey and Oakes battled in the opposite semifinal for the right to face Emhardt in the finals. Hickey, who won a flight in the Purdue Invitational last weekend, advanced to his second straight final in as many weeks with a 6-4, 6-3 win over his fellow sophomore.

Emhardt continued his trend of fast matches as he handed Hickey a 6-1, 6-2 defeat to claim the C flight championship.

The Crusaders will have three weeks off before the ITA Midwest Regionals in Columbus, Ohio. The four-day event begins Thursday, October 17th.