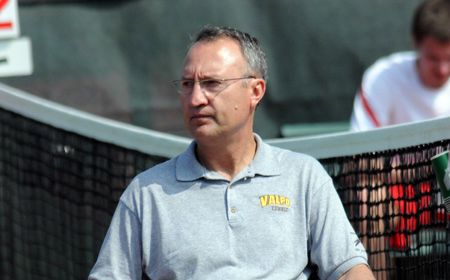 Head Coach Jim Daugherty saw two freshmen make the main draw at the ITA Midwest Regionals Friday. It marked the first time a Crusader ever won more than one match at the tournament.

It was the closest one could possibly get to a David vs. Goliath on the tennis court Friday.

The 5'9'' freshman Dave Bacalla (Skokie, Ill./Niles North) challenged the 6'7'' fifth-year senior Peter Kobelt at the Varsity Tennis Center in Columbus, Ohio in the first-round of the main draw of the ITA Midwest Regionals.

Bacalla had collected two wins yesterday in the qualifying bracket and one this morning to earn a spot in the main bracket alongside players from BCS stalwarts such as Ohio State, Michigan State, and Notre Dame.

Kobelt, who possesses both a 140 mph serve and 93 career singles victories, was the highest-ranked player a Crusader had ever faced in school history.

And though the biblical tale didn't fully resurrect itself Friday afternoon in Central Ohio, a 6-3, 7-6 loss to the #3 player in the country spoke volumes about the 18-year old's play.

Bacalla was up 5-3 in the second set before the Kobelt mounted a comeback to avoid a decisive third set.

With the loss, Bacalla's singles record adjusted to 9-3.

Jeffrey Schorsch (Perrysburg, Ohio/Perrysburg) took a similar path to the main draw, except the freshman did not lose a set in the three matches he won en route to the big Field of 64.

Like Bacalla, Schorsch drew an Ohio State Buckeye as he was met with Marko Goles-Babic, a highly-touted freshman out of Croatia.

Schorsch went toe-to-toe with Goles-Babic before Schorsch fell 6-4, 6-4. Goles-Babic entered the match with the 17th seed.

There are few scenarios where a coach can find a healthy level of optimism and satisfaction after a loss. Friday afternoon represented one.

"Jeffrey played really, really well. This was a landmark day for our program. I think we proved we belong with anyone on the court," Daugherty said.

Yesterday marked the first time a Crusader has ever recorded more than one victory in the qualifying bracket at the ITA Midwest Regionals.

Because both Bacalla and Schorsch made the main draw, they will play in the consolation bracket tomorrow.

Bacalla will face another Big Ten opponent tomorrow. Michigan State's John Patrick Mullane lost his first-round match to NIU's Axel Lagerlof which sets up a date with the Valpo rookie. Schorsch will challenge DePaul's Sten Leusink. Leusink was on the losing end of a straight set tilt with Northwestern's Sam Shropshire Friday evening.

The times of tomorrow's matches have yet to be determined.