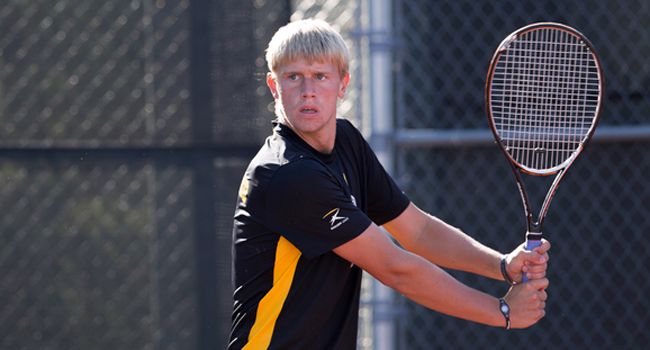 The Crusaders boosted their record to 4-1 on the young season Saturday at the Courts of NWI. The Brown and Gold recorded a 7-0 shutout over Marian University in the morning tilt before handing Grace College a similar result in the latter half of the twin bill.

Valpo rolled to straight set wins at each singles spot save for No. 5. Sophomore Lucas Waak (Manitowoc, Wis./Roncalli) rebounded after dropping the first set to claim a dramatic 4-6, 6-3, 10-5 victory.

Playing at No. 1 singles, Schorsch downed Jason Denton 6-3, 6-1. The freshman improved his individual record to 12-5. Later in the day, Bacalla joined Schorsch with 12 wins. Both rookies are four singles victories away from cracking Valpo's top ten list for individual wins in a season.

Michael Savaglio (Kenosha, Wis./Mary D. Bradford) won a narrow first set 6-5 (7-3) over Albert at No. 2 before rolling 6-1 in the second set en route to his tenth singles victory on the season.

Valpo kept its foot on the accelerator in the afternoon match versus Grace College. The Crusaders surrendered no more than three games in any set in the 7-0 victory over the Lancers.

Bacalla/Oakes repeated with another 6-1 win at No. 1 doubles. Schorsch and Emhardt redeemed themselves with a 6-1 triumph over Jack Wang and Ethan Grove at No. 2, clinching the doubles point. Honert and Waak added a 6-3 win at No. 3 for good measure.

The Crusaders mathematically secured the match when Honert beat Wang 6-1, 6-1 at No. 3 singles.

Emhardt got past Jake Stump 6-3, 6-2 to make it a clean sweep for the Brown and Gold.

Valpo (4-1) will rest up before making a quick turnaround tomorrow when it hosts the Dayton Flyers (1-3) Sunday afternoon at 2:30 pm inside The Courts of NWI.