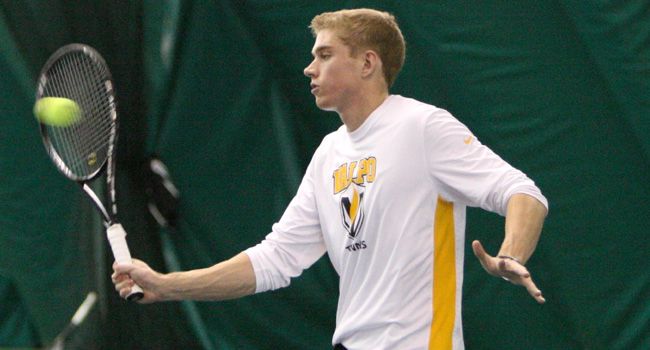 Valpo continued its strong play at the top and bottom of singles play in a decisive 5-2 decision over Niagara Saturday morning at the Star Island Resort in Orlando, Florida.

With the win, the Crusaders improved to 8-3 on the spring season.

The No. 1 doubles team of Dave Bacalla (Skokie, Ill./Niles North) and Danny Oakes (Elburn, Ill./Saint Charles North) boosted their tandem record to 8-2 via an 8-3 defeat of Niagara's Olivier Dufour-Coursol/David Raymond.

The Purple Eagles' pair of Mathieu Lacasse and Lorenz Schwojer got past Eric Honert (Arvada, Colo./Ralston Valley) and Lucas Waak (Manitowoc, Wis./Roncalli) at No. 3 doubles with an 8-5 decision.

The Crusaders exploded out of the gate in singles play with four straight-set victories. Michael Baiocchi (Naperville, Ill./Neuqua Valley) easily handled Lacasse at No. 6 singles. The sophomore won 6-0, 6-3.

Bacalla provided the match-clinching point for Valparaiso at No. 2 singles thanks to a 6-4, 6-3 triumph over Dufour-Coursol. Bacalla is now 16-5, which moved him into the Top 10 for singles victories in a season.

Valparaiso will play two matches tomorrow at the Star Island Resort. The Crusaders will square off against Robert Morris at 8:30 am. The Colonials (0-4) are in search of their first win of the spring slate. After their morning affair with RMU, the Brown and Gold will face St. Cloud State (5-5) at 4:00 pm.