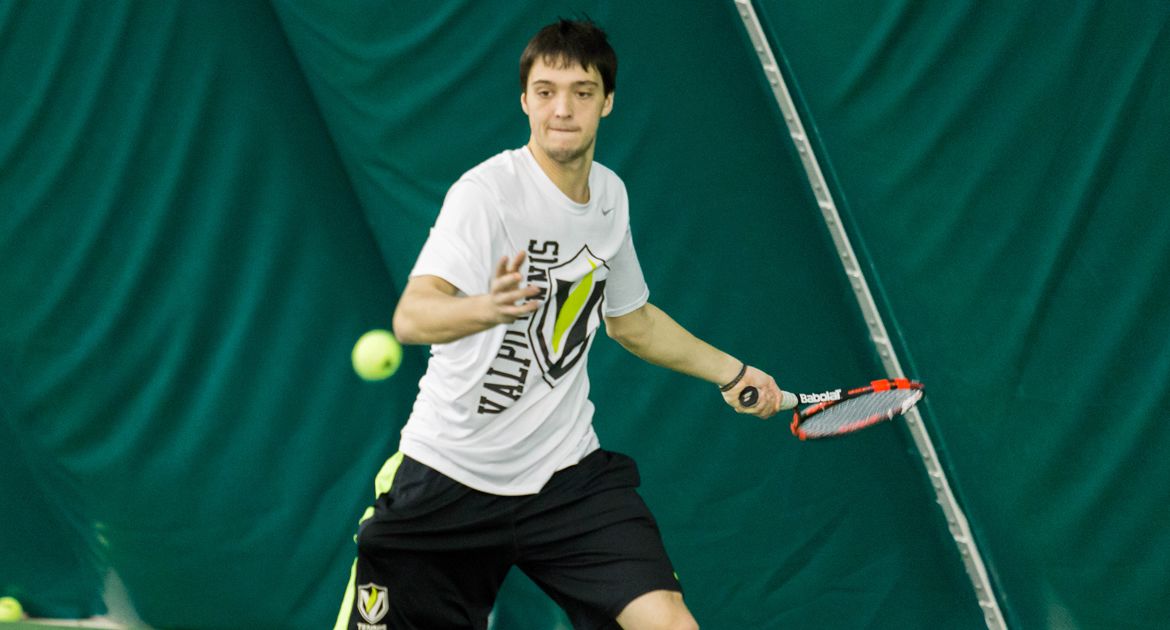 The 33rd-ranked duo of Jeffrey Schorsch (Perrysburg, Ohio/Perrysburg) and Charlie Emhardt (Carmel, Ind./Carmel) didn't miss a beat in Valpo's spring opener at #7 Illinois on Friday morning. The tandem defeated Alex Jesse/Jared Hiltzik at No. 1 doubles, but the Fighting Illini clawed their back for a 4-0 victory at the Atkins Tennis Center.

Schorsch and Emhardt's 6-4 triumph atop doubles play was sandwiched between a pair of Illinois wins, however. Aleks Vukic and Aron Hiltzik got past Dave Bacalla (Skokie, Ill./Niles North) and Lucas Waak (Manitowoc, Wis./Roncalli), 6-2, at No. 2 before Brian Page and Julian Childers doubled up Danny Oakes (Elburn, Ill./Saint Francis North) and Garrett Gardner (Poland, Ohio/Poland), 6-3, in the deciding match at No. 3 doubles.

Singles play opened with Schorsch in command over two-time All-American #21 Jared Hiltzik at No. 1. The junior took the first set 6-2 and was in the midst of a second-set tiebreaker when Illinois secured the match.

Waak was victorious in the first set of his No. 6 duel with Asher Hirsch by the score of 7-5. Hirsch responded with a 6-2 win in the second set, and their match ended immediately following Jesse's triumph at No. 5.

Kyle Dunn (Fond du Lac, Wis./Fond du Lac) took Pengxuan Jiang to a tiebreaker, but fell 7-6 in a tight first set. The two were knotted at 1-1 in the second set when play ended.

Valpo (0-1) will return to Northwest Indiana to host Toledo in its home opener Saturday afternoon. First serve is slated for 2:00 pm CT from the Courts of NWI.