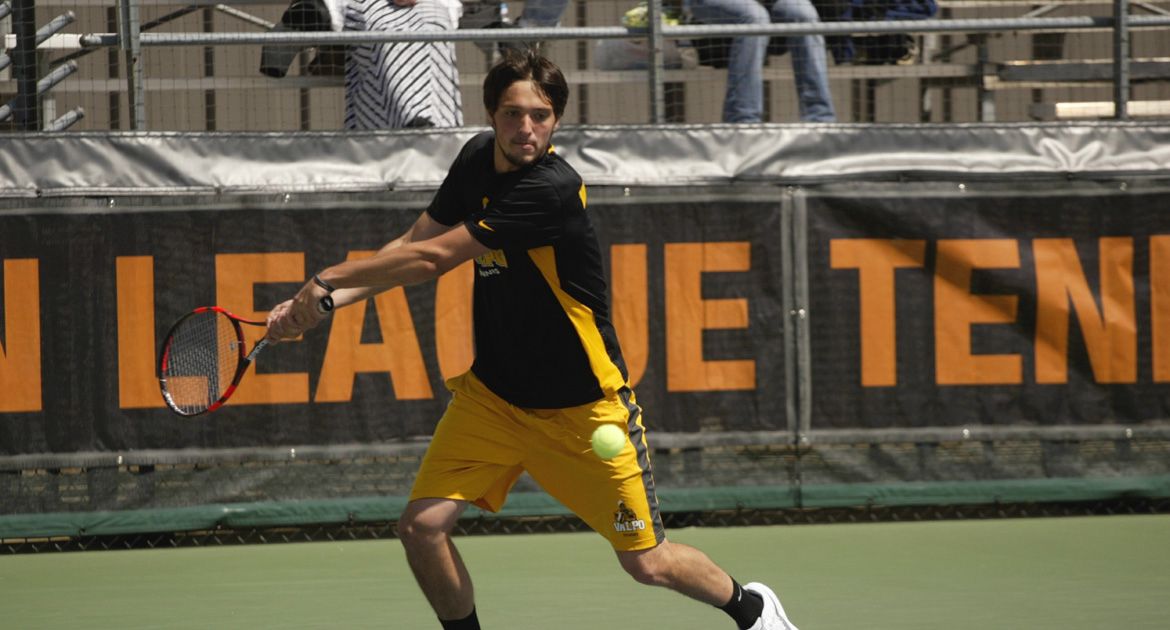 Jeffrey Schorsch was victorious at No. 1 singles and No. 1 doubles in Valpo's 4-0 win over Cleveland State Saturday in the semifinals of the Horizon League Championship. (Brian Drumm)
Related Links

A year and four days after its Horizon League title run was denied in West Lafayette, Indiana, the Valpo men's tennis team is back in the finals.

For the 14th time this calendar year, Valpo used victories at No. 1 and No. 3 doubles to scoop up the opening tally. The Horizon League's Freshman of the Year Chad Kissell (Latrobe, Pa./Greater Latrobe) and Kyle Dunn (Fond du Lac, Wis./Fond du Lac) doubled up Mirko Radosevic and Benjamin Slade 6-3 at No. 3.

Moments later, Jeffrey Schorsch (Perrysburg, Ohio/Perrysburg) and Charlie Emhardt (Carmel, Ind./Carmel) wrapped up doubles action with a 6-3 triumph of their own opposite Joe VanMeter and Andre Mick at No. 1.

Schorsch commenced singles play with a fury. The lefty captured the first set 6-0 in his duel versus VanMeter at No. 1. He rolled to a 6-2 win in the second set to put the Brown and Gold ahead, 2-0.

Dunn was the next Crusader to rattle off a singles win as he defeated Mick by a score of 6-2, 6-0 at No. 6. With a victory in tomorrow's title match, he can obtain exactly 22 singles wins for the third consecutive season.

Kissell finished off the shutout at No. 2. He upended Radosevic 6-3, 6-3 for his 27th singles win of the season.

Dave Bacalla (Skokie, Ill/Niles North), Garrett Gardner (Poland, Ohio/Poland), and Emhardt all took the first sets of their singles play and were in the middle of second-set action when Valpo clinched the match and play was halted.

With the 4-0 win, Valpo (21-5) moves on to the Horizon League Championship title match for the second time in as many years. The Crusaders will face the winner of Green Bay/Northern Kentucky Sunday at 3:00 pm ET/2:00 pm CT. ESPN3 will carry live action of the finals. The link to the video is posted at ValpoAthletics.com.