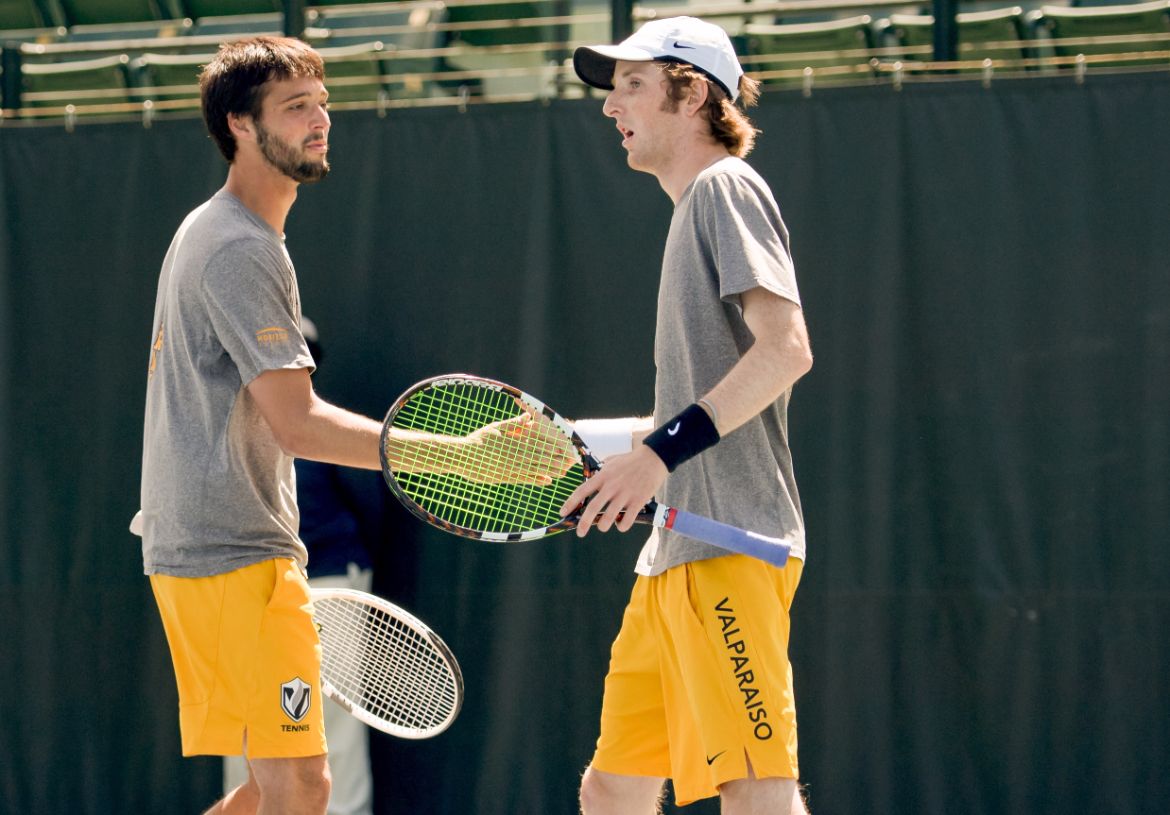 Based on the ITA National Rankings, Thursday’s win in the first round of the NCAA Doubles Tournament was another upset victory for Jeffrey Schorsch (Perrysburg, Ohio / Perrysburg) and Charlie Emhardt (Carmel, Ind. / Carmel). But by this point in their careers, nobody is surprised when the Valparaiso University men’s tennis seniors emerge victorious on a big stage against a high-level opponent.

After reaching the championship match of the USTA/ITA Indoor National Intercollegiate Championships last fall and winning a first round match against Michigan in the team NCAA Tournament earlier this month, Schorsch and Emhardt added another triumph against a nationally-ranked foe on Thursday. The match couldn’t have been much closer, but No. 41 Schorsch and Emhardt knocked off No. 9 Arthur Rinderknech and AJ Catanzariti of Texas A&M 7-6(5), 6-7(11-13), 11-9.

In the first set, Schorsch and Emhardt went up 3-0, then dropped five straight games to fall behind 5-3, but pulled out the narrow victory. Texas A&M fended off a number of match points to win Set 2, but the Crusaders eventually escaped with the win in the three-set thriller.

The victory sets up a rematch in Round 2 as the Crusaders will once again lock horns with Mississippi’s Fabian Fallert and Grey Hamilton, who are ranked 19th nationally. Emhardt and Schorsch got the better of that duo in the national indoor championships on Nov. 4 in Flushing, N.Y., winning a quarterfinal match 6-2, 6-4. Fallert and Hamilton beat Butler’s Mikheil Khmiadashvili and Mason Dragos 6-4, 6-3 in Thursday’s opening round.

The win on Thursday was Schorsch and Emhardt’s third victory against an opponent ranked in the nation’s Top 10 this season. Valpo’s top doubles team improves to 21-6 overall this year. Schorsch picked up his 30th doubles win of the season, tying the program record set by him and Emhardt as sophomores. For Emhardt, it was career doubles win No. 116, which marks the program record.

Links to live video and stats are available on ValpoAthletics.com. The start times for Friday’s second round matches will be announced on Thursday evening.