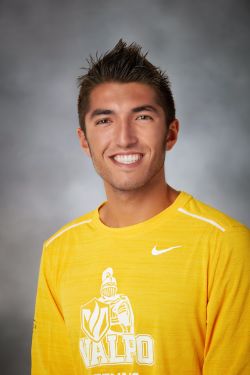 Michael Savaglio enters his second season as an assistant coach for the Valparaiso University men’s tennis program in 2017-2018 season.

Savaglio returned to the program in 2016-2017 after spending the previous four seasons playing for the Crusaders. He was a member of the 2016 Horizon League championship team, contributing 15 singles wins to help Valpo to its first NCAA appearance in program history and a program-record 22 team victories.

A native of Kenosha, Wis. and graduate of Mary D. Bradford High School, Savaglio won 16 singles and 17 doubles matches as a freshman at Valpo, finishing that season second in program history in single-season doubles victories and tied for seventh all-time in single-season singles wins. He won 18 singles matches in 2014 and posted a career-high 20 singles wins in 2015.

Savaglio spent the summer of 2015 as the tennis director at St. Joseph Catholic Academy before serving as a teaching professional at College Park Athletic Club in the summer of 2016. He also spent both 2015 and 2016 as an independent coach for individuals with abilities varying from first-time players to high-levels juniors, including a two-time state champion

During his time as a student-athlete at Valpo, Savaglio was a team captain, a Student Athlete Advisory Committee representative and achieved Horizon League academic honors. Savaglio received his bachelor’s degree in exercise science from Valpo in 2016. He also earned minors in human biology, chemistry and psychology.