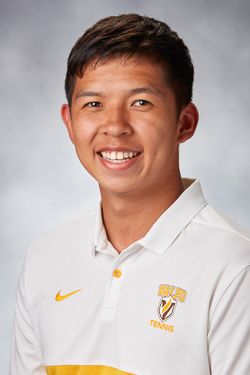 Eddie Chen has joined the Valpo men’s tennis staff for the 2019-2020 season as a graduate assistant coach. He comes to Valpo after earning his undergraduate degree in business administration and human resource management from Weber State University in April 2019.

Chen was a scholarship athlete at Weber State for five seasons, where he helped the team reach the NCAA Tournament for the first time in program history in 2016 after winning the Big Sky Tournament title. He also helped guide the squad to Big Sky regular season championships in both 2015 and 2016. He finished second in the conference in doubles during the 2017 campaign.

Chen coached a player who won the top singles draw at the Wildcat Invitational Tennis Tournament in 2018. In that same event, he guided two team members who took first in the No. 2 doubles draw. In addition, Chen directed two players who won the doubles championship at the Boise State Invitational in 2018.

A native of Taiwan, Chen is pursuing a master’s degree in international policy and commerce at Valpo.