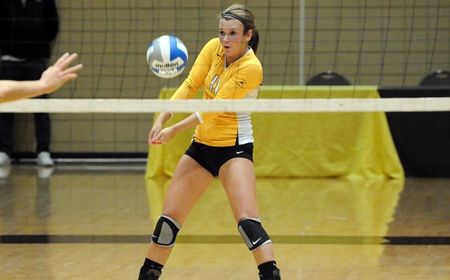 The day did not start off on the right foot for Valpo, as despite hitting .375 with 16 kills in the opening set against Eastern Kentucky, the Crusaders' offense was second best, as EKU hit a stellar .515 with 18 kills in the opener.  Valpo trailed the entire second half of the frame, and despite being within one as late as 17-16, the Colonels scored eight of the final 10 points of the set to take a 1-0 lead.  The Crusaders rallied from a seven-point deficit in the second set and actually led at 23-22, but Eastern Kentucky converted on a second set point opportunity to go into the in-game break up two sets.

EKU was looking for the sweep in the third set, jumping out to a 12-8 lead, but a five-point spurt featuring two kills each by Val Bollenbacher (Bremen, Ind./Bremen) and Diebler gave Valpo the lead at 13-12.  A 6-0 run later in the set gave the Crusaders a 20-16 edge, but the Colonels rallied and earned match point chances at both 24-23 and 25-24.  Katie Britton (Mishawaka, Ind./Marian) registered kills with the Crusaders' backs against the wall both times, however, and an EKU attack error eventually ended the third frame in Valpo's favor.

The fourth set featured an early 5-0 run, buoyed by a pair of service aces by freshman Ariel Cudney (LaPorte, Ind./LaPorte), as the Crusaders jumped out to a 7-5 lead, an advantage that was extended to as much as 20-13 after back-to-back kills by freshman Sarah Dooms (Greenwood, Ind./Center Grove).  Eastern Kentucky went on a monster run at that point, however, scoring 11 of the next 13 points to have two more match point opportunities at 24-22.  An EKU service error, followed by consecutive kills yet again from Britton, turned the tables in Valpo's favor, and a solo block by Jenny Pokorny (Geneva, Ill./Geneva) sent the match into a decisive fifth set.

The Crusaders held the lead throughout the first half of the fifth set, but Eastern Kentucky rallied to take the lead at 8-7.  An attack error by the Colonels started off a Valpo spurt, though, as the Crusaders scored five of the next six points to gain breathing room at 12-9.  EKU remained within two points at 13-11, but another kill by Britton gave Valpo a trio of match points and Diebler came through on the first attempt with a kill to close the impressive rally from two sets down.

Britton led all players with a career-best 24 kills, swinging at a .261 clip, as all five Crusader hitters posted double figures in kills.  Diebler backed her up with 16 kills on .314 hitting and also tied for match-high honors with five blocks.  Bollenbacher, Dooms and Katie Layman (LaPorte, Ind./New Prairie) all posted 11 kills as well.

Pokorny posted a career high in the assists column, dishing out 58 helpers on the morning while also chipping in 15 digs for yet another double-double.  Root led the Valpo effort in the back with 23 digs, while Dooms set a new career-best with 19 digs.  Andrea Balsis (Benton Harbor, Mich./Coloma) helped out on the defensive side with 16 digs of her own.  Abby O'Connor paced all players with 35 digs, while Ashley Edmond posted 18 kills and 18 digs for Eastern Kentucky (1-4).

“You have to give Eastern Kentucky all the credit for how the first half of the match went, because they were playing awesome,” said Avery.  “They were playing hard and aggressive, pushing us to the max, and were performing almost flawlessly.  We were struggling with our defensive transition and making errors at crucial times.  But being down like that, it was outstanding for us to come back.  To win in extra points twice and then win the fifth set really showed a lot about our team.”

The evening match against the host Mountaineers did not get off to a good start either, as a late 7-2 run by Appalachian State gave it control of the opener.  The second set, however, seemed easily in the Crusaders' favor, as Valpo got out to a 12-4 lead, keyed by a pair of aces by Diebler and back-to-back kills from Layman.  ASU rallied and actually closed to within one at 21-20 before kills by Layman and Pokorny, followed by an ace from Dooms, gave the Crusaders four set points.  Valpo would need to utilize the entire quartet of chances before finally heading into the in-game break tied at one set apiece thanks to a kill by Britton.

Appalachian State came out in the third set and took the advantage, jumping out to a 5-1 lead and then following a four-point Crusader spurt, extending the lead back out to 10-6.  But then a fortutious long break in the action for an inquiry into the accuracy of the score worked out in Valpo's favor, as it regrouped and promptly reeled off a match-turning 8-1 run, including three kills from Diebler and two by Britton.  The Mountaineers hung around, tying the set at 18 apiece and then closing back within one at 22-21, but a pair of ASU errors gave Valpo set point and Britton and Diebler combined on a rejection to move the Crusaders one set from the tournament title.

The fourth set was also in ASU's favor early, as it held a 7-5 lead before the tide again turned in the Crusaders' favor.  A pair of blocks, first from Diebler and Dooms and then one by Bollenbacher and Diebler, helped key a 5-0 spurt that eventually extended into an 11-2 run.  With the lead at seven points, Valpo was able to cruise to the win from there, with Diebler putting down kills on three of the match's final four points, including championship point.

Diebler was a strong force at the net against the Mountaineers, hitting .379 with a match-best 15 kills while finishing with seven blocks, just one off her career high.  Layman matched her career high with 13 kills on .310 hitting as well.  Root came through with a standout effort on the back row, posting a career-best 35 digs, third-most in a four-set match in Valpo volleyball history.  Kelly Rhein posted a double-double with 12 kills and 11 digs for Appalachian State (6-1).

“I think the way we had to claw and fight in the morning match really helped us for the championship match,” said Avery.  “We had our game plan going into the match, and really started executing it well in the second set.  Our service game picked up, and our blocking really took over, especially at the end of set three into set four.  We took care of out-of-system balls, the block stepped up and Taylor took care of everything her way in the back row.”

Diebler was named the tournament MVP after a stellar performance on both sides of the ball, averaging 3.23 kills/set for the three matches while swinging at a .357 clip offensively and posting 1.31 blocks/set defensively.  Root's effort on the back line against the Mountaineers capped a weekend in which she averaged 6.15 digs/set, good for the fourth All-Tournament honor of her career.

“I couldn't be any more proud of the team right now,” said Avery on the 6-1 start.  “We are playing good enough to win, but we have so many things still to work on and improve.  But we're executing at the right times in the matches and making the results happen in our favor.”

Valparaiso (6-1) puts its six-match winning streak on the line on Tuesday, traveling to Terre Haute to face off in non-league action against Indiana State at 6 p.m. CDT.  All the action can be heard live on WVUR, 95.1 FM, Valparaiso and online at www.valpoathletics.com, which will also have links for live stats and a live chat.