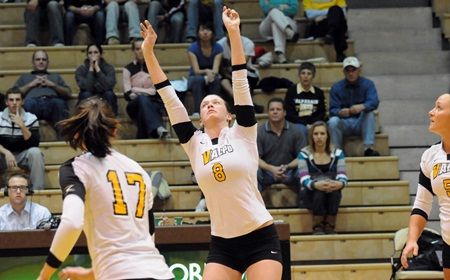 Valparaiso extended its winning streak to nine straight matches Saturday morning, sweeping Hofstra (25-13, 25-14, 25-22) at the Bradley CEFCU Classic in Peoria, Ill.  The win puts the Crusaders in position to earn their third consecutive in-season tournament title this evening when they take on the host Braves.

The nine-match winning streak matches the fourth-longest stretch of victories in program history, tying a streak put together by the 2004 team.  That 2004 squad also holds the record for longest winning streak at 14, while the only other longest streaks were produced by the 2008 (13) and 1995 (10) squads.  Valpo has now also won 12 consecutive sets dating back to last Saturday's 3-1 win over Appalachian State.

“We emphasized to the team today to not let happen what happened last Saturday morning (falling behind 2-0 to Eastern Kentucky),” said Crusader head coach Carin Avery.  “We wanted to come out strong, especially since we knew Hofstra would be a little tired after playing late last night.  So we wanted to get on them right away, and we definitely did that in the first set.”

The opening set was never in doubt from the start, as Valpo jumped out to a 14-2 advantage and cruised from there.  Katie Layman (LaPorte, Ind./New Prairie) had three kills within the match's first five points to get the Crusaders going on the right foot, while they also had a trio of service aces during the spurt, including two by Taylor Root (Jenison, Mich./Jenison).  The lead never dropped below nine points the rest of the way, with Sarah Dooms (Greenwood, Ind./Center Grove) eventually closing the set with a kill.

The second set had almost as little doubt to it, as Ariel Cudney (LaPorte, Ind./LaPorte) started the set with a service ace to jump-start an 8-2 spurt to start the frame.  Cudney's ace was one of five the Crusaders would tally in the frame, while defensively Valpo held Hofstra on -.062 hitting in the second set.  The combination of the service game and defensive play was enough to overcome an .086 attack percentage on the offensive side of the ball, as the Crusaders never led by less than five after the set-opening run to take the 2-0 lead.

After facing very little challenge in the first two sets, the third frame was the polar opposite for Valpo, as Hofstra (3-7) racked up three early service aces en route to an early 8-3 advantage.  The Pride led throughout the first half of the set, extending their lead to as many as six points.  But the Crusaders slowly clawed back, tying the set for the first time at 18-18.  Hofstra responded with a kill, but a 5-0 run featuring two kills by Tara Diebler (Indianapolis, Ind./Franklin Central), one each by Amy Groesbeck (Wheaton, Ill./North) and Jenny Pokorny (Geneva, Ill./Geneva) and another Cudney ace put Valpo ahead 23-19, where it eventually ended the sweep on a Diebler kill.

Valparaiso hit at a .325 clip in the final set with 17 kills, capping a 39-kill, .238 performance offensively.  Diebler was the only player on either side of the net in double figures, racking up 13 kills on .321 hitting, while Pokorny hit .333 with seven kills and also handed out 25 assists.  Root tallied four aces as Valpo racked up ten service winners as a team, and the sophomore also led all players with 16 digs.  Ellen Vanden Berg (Little Chute, Wis./Little Chute), who played two sets in the middle, was in on four of Valpo's 6.5 team blocks, including a pair of solo rejections.

“I think it was great that, at times today, we had five freshmen together on the court,” said Avery.  “We really got a chance to see our team's future out there.  I especially thought Ellen really showed her strengths and why we recruited her in her net play today.”

Valparaiso (9-1) goes for the tournament championship for a third straight weekend this evening at 7 p.m. against the host Braves.  A win tonight would also match the 2003 Crusader squad for the best start in program history.  All the action can be heard live on WVUR, 95.1 FM, Valparaiso and online at www.valpoathletics.com, which will also have links for live stats and chat.