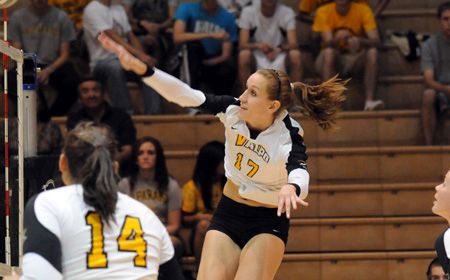 For the fifth time this season, Valparaiso rallied after dropping the first set, coming from behind to earn a 3-1 (18-25, 25-12, 25-18, 25-21) victory over Wright State Friday evening at the ARC in the team’s Horizon League opener.  The Crusaders, who were playing at home for the first time this season, have now won 11 consecutive matches and own the best 12-match start in program history at 11-1.

The Crusaders led briefly in the very early going of the opening set, but that was the only point at which they would be ahead in the opener.  With Valpo still within one at 8-7, Wright State reeled off four straight points to take control.  The Crusaders rallied back to within 15-14, but a 5-0 spurt by the Raiders put the set out of reach.

“On the same note, I think being home for the first time was part of the reason we struggled in set one,” said Avery.   “We just were nervous and very tentative and just weren't playing good volleyball.  After that first set, I thought then we settled down and let the game come to us more.  We focused on our game plan and stuck to it, and obviously good things started happening.”

A quick 4-0 start on kills by Tara Diebler (Indianapolis, Ind./Franklin Central) and Amy Groesbeck (Wheaton, Ill./North) and a block by Diebler and Sarah Dooms (Greenwood, Ind./Center Grove) got the Crusaders out on the right foot in the second set.  A service ace by Ariel Cudney (LaPorte, Ind./LaPorte) pushed the lead out to 8-2, and after Wright State scored two straight points, the Crusaders reeled off a 7-0 run, featuring a pair of kills from Katie Layman (LaPorte, Ind./New Prairie), to move the lead into double digits.  Valpo would cruise from there, heading into the in-game break tied at a set apiece.

Another fast start was there for the taking out of the locker room, as Valpo scored the first five points of the third set, thanks in large part to a kill and two blocks, including a solo rejection, by Groesbeck.  The Crusaders held as much as an eight-point advantage through the frame and never let the lead fall under four points, although a late 4-1 WSU spurt brought the Raiders to within 23-18.  Out of a timeout, however, Groesbeck registered a kill and Cudney stepped back and fired off another ace to give Valpo the 2-1 lead into the fourth set.

Wright State led briefly early in the fourth set, but Valpo took the lead for good at 4-3 on yet another Cudney ace.  That ace was part of an 8-2 run that also featured a pair of kills by Dooms as the Crusaders led 10-5.  The lead grew to as many as nine points at 20-11 before the Raiders put together one last-ditch rally, scoring nine of the next 13 to close to within 23-20.  But a Diebler kill gave Valpo match point, and on its second opportunity, Katie Britton (Mishawaka, Ind./Mishawaka) came up with a termination to close the league opener in the Crusaders’ favor.

Valpo’s pair of middles stood out on the attack Friday, as Diebler finished with a match-best 17 kills on .419 hitting, while Layman added 10 kills on .348 hitting.  Dooms chipped in 11 kills and also tallied 11 digs for a double-double.  Setter Jenny Pokorny (Geneva, Ill./Geneva) also registered a double-double, posting 48 assists and 13 digs to go along with seven kills.

“I thought both Tara and Katie were outstanding tonight,” said Avery.  “We really did a great job with both our middles exploiting Wright State on our slide attack.  Their blocking was great as well, I just can't say enough about how well they played tonight.”

Cudney tallied all four of Valpo’s service aces, increasing her Horizon League-best total to 23 on the season.  Taylor Root (Jenison, Mich./Jenison) led all players on the back line with 20 digs, while Diebler and Groesbeck were both in on four of Valpo’s nine team blocks.  Shaunda Sandifer led Wright State (5-7, 0-1 Horizon) with 11 kills and six blocks, while Jessica Woods picked up 10 kills and 16 digs.

“I think another thing that might have gotten to us in set one is the pressure of league play,” said Avery.  “Everybody wants to win so desperately once we get into the league.  Playing in the early-season tournaments, there’s not a lot of pressure.  You want to do well, but at the end of day those matches don't matter nearly as much as the league matches.  We were all excited to start Horizon League play finally, to get our first look at how strong the league will be this year.”

Valparaiso (11-1, 1-0 Horizon) puts the winning streak on the line once again Saturday afternoon as the Crusaders play host to in-state rival Butler in one of many Communiversity Day activities planned on the Valparaiso University campus tomorrow.  First serve is slated for 4 p.m., and as always, all the action can be heard and/or seen online at www.valpoathletics.com, with the audio broadcast also available locally on WVUR, 95.1 FM.  Live stats will also be available through the official Crusader website.