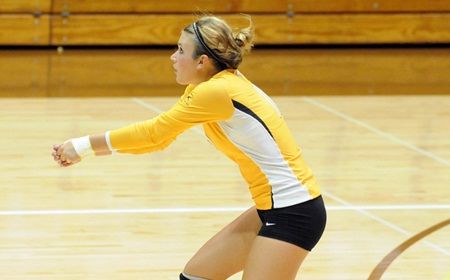 Valparaiso concluded its 2010 campaign on a winning note and sent the senior class out winners with its 27th victory of the season, fending off set points in each of the final three frames to defeat Western Michigan 3-1 (11-25, 27-25, 27-25, 27-25) Saturday evening in Kalamazoo, Mich.  Sophomore libero Taylor Root (Jenison, Mich./Jenison) set new single-season program and Horizon League records for digs, closing the year with 754 total digs.

Valpo won 27 matches in a single season for the third time in program history, matching the second-most wins in a single year all-time.  Saturday's win was arguably the Crusaders' most impressive of the year, coming from behind on the road against a Western Michigan squad out of the MAC which entered the match ranked 46th in the nation in RPI and in contention for an at-large bid to the NCAA Tournament.

All four seniors contributed as well in their last match in a Valpo uniform.  Balsis, who posted eight digs on Saturday, ends her career with 456 total digs.  Bollenbacher registered 10 digs and six digs against Western Michigan and closes her time at Valpo with 830 digs and 932 kills.  Layman posted eight kills and a block Saturday to end her career with 590 kills and 274 blocks, tenth most all-time at Valpo.  Diebler tallied nine kills, five digs and a pair of rejections versus the Broncos and ends her time at Valpo ranked seventh in program history in kills (1,097) and ninth in blocks (320).

Meanwhile, Root reached the halfway point of her Crusader career with a milestone night, surpassing Brittany Malicoat's 2007 total of 740 digs to set a new league and program single-season record, despite now playing 25-point rally scoring as opposed to 30-point rally scoring.  Root, who entered Saturday night with 726 digs on the year, recorded nine digs in the first two sets and then matched the record at 13-16 in the third frame before breaking it at 15-17.  She ended the match with a team-best 28 digs and continues to pace the nation in digging at 5.94 digs/set.

The opening set did not foretell the eventual outcome of the match in any sense, as after freshman Sarah Dooms (Greenwood, Ind./Center Grove) opened the contest with a kill, Western Michigan reeled off 11 straight points to take control of the opener.  Valpo would rally at 13-3, putting together five straight points, including a pair of kills by junior Katie Britton (Mishawaka, Ind./Marian) and a block from Britton and Diebler, to crawl back to within five points at 13-8.  But WMU proved too strong in the opener, ending the frame on a 12-3 run to easily gain the 1-0 advantage.

The second set got off to a much better start for the Crusaders, as two early kills by Britton along with terminations by Bollenbacher, Diebler and Dooms helped send Valpo to an 8-4 advantage.  The Broncos answered with five of the next six points to tie the frame at nine, setting up a tight set that would feature 10 ties and four lead changes.  A three-point spurt just past the midway point featuring kills from Diebler and Dooms gave Valpo the 17-14 edge, but Western Michigan responded with a 7-1 run to take a 21-18 lead.

Kills from Dooms and Layman helped the Crusaders crawl back to within 23-21, but a kill by WMU's Allison Doyle positioned the Broncos to take the 2-0 lead into the in-game break.  But a kill by Britton staved off one Western Michigan set point chance, and then back-to-back attack errors tied the set at 24-all.  Taylor Richard set WMU up with another set point opportunity with a kill to make it 25-24, but again Britton came up with another big termination.  Then Diebler picked up a huge solo block to give Valpo its first chance to take the second frame, and another Bronco hitting error gave the Crusaders the set.

An early 4-2 lead for the Crusaders in the third set was quickly erased by Western Michigan, which scored nine of the next 11 points to seemingly take control approaching the midway mark at 11-6.  A number of Valpo attempts to tie the set were thwarted just one or two points shy throughout the second half of the set, as WMU would push the lead back to four points a few different times.  Trailing 20-16, Diebler picked up a kill, and then following a Bronco attack error, sophomore Mary Dent (Chicago, Ill./Von Steuben) tallied a kill of her own to bring Valpo within 20-19.

WMU answered with the next two points to push its lead back to three points, but kills by Bollenbacher and then Dent cut the Crusader deficit to just one point again at 22-21.  The Broncos' Emily Harris registered a kill, but Dent responded with a third late kill to keep Valpo within one.  Doyle then set WMU up with a pair of set point chances with another kill, but first Britton and then junior Jenny Pokorny (Geneva, Ill./Geneva) tallied rally-enders to tie the set at 24.  A WMU attack error gave Valpo its first chance at the set, and while Jessica Brown kept the Broncos alive that time, a kill by Britton and yet another Bronco error put the Crusaders 2-1 heading into the fourth set.

The fourth set saw the Crusaders hold a narrow lead throughout much of the frame in search of its final set win of the season.  Kills by Layman and Pokorny got the set off on the right foot, and Valpo did not trail until a mid-set three-point spurt by the Broncos gave WMU a 16-15 lead.  From there, neither side led by more than two points the rest of the way in a battle to the end.  A 4-1 Valpo spurt pushed the scoreboard back in its favor, 19-17, and the two squads would side out on nine straight services, the last a kill by Doyle for WMU that made the score 23-22 in Valpo's favor.

Brown then picked up a solo block for the Broncos to tie the set at 23-all and set up the match's final sequence.  Dooms gave Valpo its first chance to take the match with a kill to make it 24-23, but then committed an attack error to even the ledger at 24 apiece.  Richard tallied her 13th kill of the match for WMU to give her side a chance to force a decisive fifth set, but the fifth-year senior Bollenbacher would have none of that, picking up a kill to tie the set at 25-all.  Another kill by Dooms set the Crusaders up with a second match-point chance, and fittingly a senior would end the season for Valpo, as Layman put down the final termination of her career to give the Crusaders the victory.

Britton stood out offensively for the Crusaders on Saturday evening, picking up a match-best 19 kills while hitting .400, committing just three attack errors.  Dooms also reached double figures in the category, tallying 10 kills while also posting 21 digs for a double-double.  Pokorny handed out 51 assists and posted 14 digs as well.

Western Michigan (22-10) put five players in double digits in kills, paced by 17 kills from Brown and the aforementioned 13 by Richard.  Bronco libero Lena Oliver led all players with 30 digs as well.  WMU actually led the Crusaders in kills (69-61), digs (92-89) and blocks (7-4), but Valpo committed just 18 attack errors against 27 miscues by the Broncos.

In addition to Root's record-setting season, a pair of other Crusaders also cracked the individual single-season top-10 charts.  Freshman Ariel Cudney (LaPorte, Ind./LaPorte) tallied two more service aces on Saturday to close her rookie season with 54 aces, fifth-most in Crusader history and the most in a single year since 1991.  Meanwhile, Pokorny played all 130 sets for the Crusaders this year at setter, handing out 1,363 total assists, sixth-most in a single campaign.

As a team, Valpo notched a number of single-season top-10 performances which led to the 27 victories.  The most impressive feat for the Crusaders came on the back line, as Valpo had five different players average at least two digs per set en route to 2,447 total digs on the year, second-most in school history and just 32 off the standard set by the 1991 squad.  The Crusaders also finished with the seventh-most kills (1,828), attacks (5,239) and assists (1,708) in a single year all-time, while they picked up 264.5 total blocks as well, their most since 2006 and the tenth-most in a single season in school history.