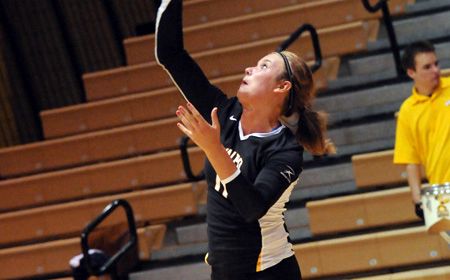 “We had a good passing game today,” said Avery. “Defensively, we did a good job keeping the ball off the ground and in play. We still need to work on our attacking and figure out where our kills are going to come from on a consistent basis. Our consistency overall still needs to improve as well. I'm happy to get to 250 career wins, and what really excites me about it is that it's a direct reflection of the number of great players that I've coached.”

The Crusaders had no trouble with La Salle in the opening set, as with the Explorers within 4-3, Valpo put together a 17-4 rush to take control and cruised to the victory. But the second set went the other direction, as with a number of reserves seeing action, the Crusaders struggled, hitting just .022 for the set. La Salle claimed the lead for good at 13-12 and never relinquished it as the match entered the in-game break knotted up at one set apiece.

Out of the gate in set three, the Crusaders looked to take control, earning the first three points of the frame. But La Salle rallied to take an 11-10 edge before Valpo dropped the hammer, scoring 12 of the next 16 points, capped by an ace by Val Bollenbacher (Bremen, Ind./Bremen), to go up 22-15 and eventually go up two sets to one.

The Crusaders led start to finish in the eventual decisive frame, but La Salle briefly closed in on Valpo in the second half of the set, pulling to within one at 15-14. Once again, however, the Crusaders went on a big run, as Jenny Pokorny (Geneva, Ill./Geneva) started things with a kill and went back to the service line and contributed two aces. The three points sparked a 10-2 spurt, with the final point of the match coming on a La Salle error

Pokorny put together a solid all-around match, handing out 33 assists while also tallying 10 digs, five kills and three aces. Taylor Root (Jenison, Mich./Jenison) led all players with 27 digs, with Dooms chipping in 12 digs of her own. The Crusaders put up ten blocks at the net, five apiece coming off the hands of Bollenbacher and Layman

The first match of the day had Valpo facing Virginia in Temple's gym. Finding themselves down 12-8 midway through the opening set, the Crusaders put together a quick 5-1 spurt to knot the frame up at 13 apiece. Tara Diebler (Indianapolis, Ind./Franklin Central) and Dooms combined on a block to start the run, while Britton and Pokorny each had kills during the rally as well

From that point, neither squad could gain more than a two-point advantage in the opening set. Virginia would earn the first set point opportunity, but a kill by Layman tied the action at 24-all. Dooms followed with a termination of her own to give Valpo its own chance to end the opener, and Bollenbacher gave Valpo the 1-0 edge with a kill.

Virginia held a distinct edge in each of the next two sets, combining to hit .375 while holding Valpo to a -.033 clip to earn the 2-1 advantage. The Crusaders held a three-point lead late in the fourth set at 21-18, but Virginia went on a five-point run to take the lead and eventually won the set and the match in extra points on a pair of Crusader hitting errors.

Britton and Diebler tied for team-high honors with nine kills against the Cavaliers, while Root led five Crusaders in double figures with 23 digs. Pokorny registered a double-double, handing out 30 assists while also picking up 10 digs and five kills, and Dooms tallied 10 digs of her own in her first collegiate match. Simone Asque led Virginia with a match-best 30 kills.

Valparaiso (1-1) concludes play at the La Salle Invitational with a pair of matches on Saturday. The Crusaders will face Hartford at noon CDT before taking on Niagara at 3 p.m. Both matches can be heard live on WVUR, 95.1 FM, Valparaiso and online at www.valpoathletics.com, which will also have links for live stats and a live chat.