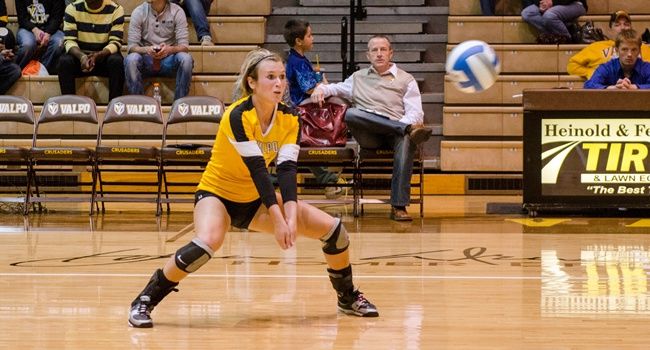 Root earns her fourth consecutive All-League honor and her third straight Defensive Player of the Year award after averaging 5.75 digs/set during the regular season and committing just 15 serve reception errors.  The senior ranks among the top-10 in the nation in digs/set this season as well, while her 696 total digs this season are third-most in a single season in team history.  Within league play, Root was even more prolific, averaging 6.58 digs/set to lead all Horizon League player.  Root’s senior year has also moved her into fourth place in NCAA history in career digs, as she enters the Horizon League Championship with 2,713 career digs.

Vanden Berg earns her first career All-League honor after excelling on both sides of the net this season.  The junior averaged a team-high 2.45 kills/set on .282 hitting, good for eighth in the league.  Defensively, Vanden Berg tallied 1.15 blocks/set to rank fourth in the league, while her 137 total blocks are sixth-most in a single season in program history.  Vanden Berg led the Horizon League in league-only games with an average of 1.49 blocks/set, while she also increased her offensive numbers to 2.88 kills/set on .298 hitting within league action.

Beil was named to the All-League team for a second consecutive season after teaming with Vanden Berg to form a formidable duo of middles.  The sophomore finished the regular season just behind Vanden Berg for team-high honors for kills, averaging 2.44 kills/set on .260 hitting and posting 79 blocks as well.  Beil also increased her output within the league, tallying 2.70 kills/set and swinging at a .267 clip.

Berrington earned a spot on the All-Newcomer Team after joining the Crusader rotation as one of its setters during her rookie season.  The freshman averaged 5.98 assists/set on the year, a mark which she increased to 6.53 assists/set in Horizon League play.  She also tallied a team-high 32 service aces and ranked fifth on the league in service aces/set.