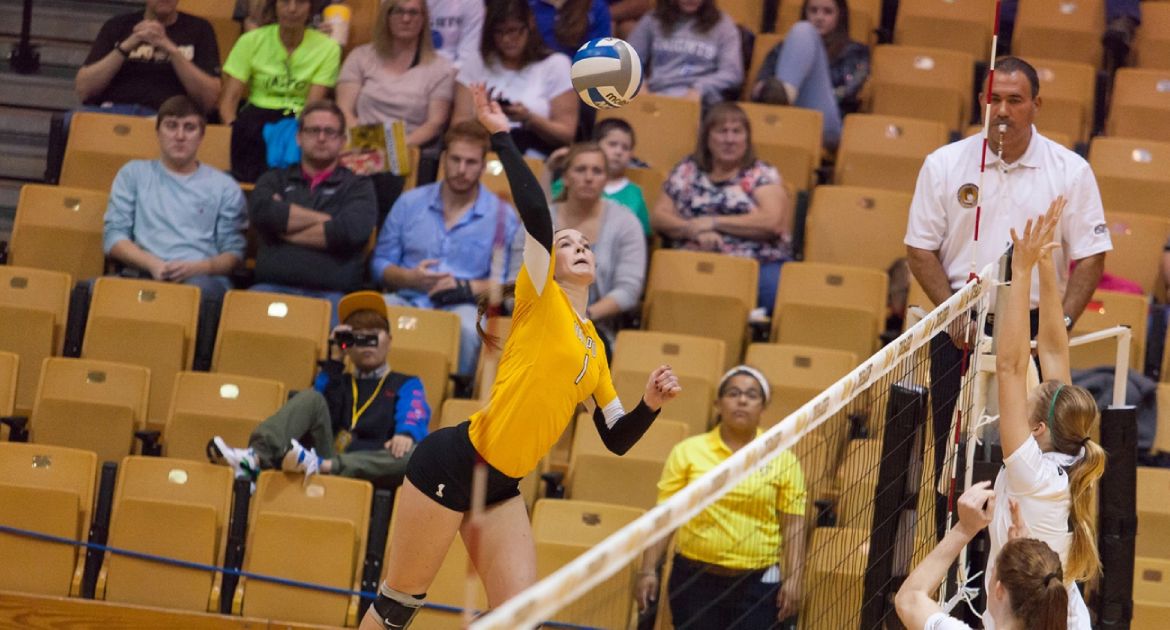 The Valparaiso volleyball team made it a clean sweep of the weekend Saturday afternoon in Youngstown, Ohio, taking down Youngstown State in three straight sets (25-17, 25-23, 28-26) to move into a tie for third place in the Horizon League standings.

“It was a great weekend for us,” said Crusader head coach Carin Avery.  “It was the first weekend we served really well, and we took both Cleveland State and Youngstown State out of their rhythm some.  We had a really good weekend on the defensive side of the ball as well - we have been working hard on that for a few weeks, and it was wonderful to see us execute this weekend.  Congratulations to the senior class on getting this team prepared and leading us to another 20-win season.  Though it is not our main goal, it is a nice thing to accomplish.”

Unlike Friday’s match, which saw just one lead change total, Saturday’s was a much tighter affair, as there were 26 ties and 11 lead changes over the three sets.  Even the first set’s score didn’t belie the close nature of the frame, as YSU scored three straight points to close to within 15-14 in the opener.  The Crusaders responded with three straight points, however – two of which came off of kills from sophomore Emily Campbell (Grand Rapids, Mich./Forest Hills Central) – to spark a 10-3 run which closed the set in Valpo’s favor.

The second set was tight throughout, with the two squads trading the lead multiple times.  It was Youngstown State which held the advantage late at 20-18 following four straight points, but the Crusaders responded with three straight to take a 21-20 lead.  The teams traded a pair of sideouts, with a Campbell kill making it 23-22 Valpo, and then a setter dump by junior Kelsey Berrington (Britton, Mich./Tecumseh) positioned the Crusaders for set point at 24-22.  On its second chance, a YSU attack error gave Valpo the set and sent the Crusaders into the in-game break up 2-0.

The third set was the first in a Crusader sweep in Horizon League play this year to go extra points.  It looked like Valpo had full control, leading 23-17 after a service ace from freshman Allison Ketcham (Mishawaka, Ind./Marian) and earning match point following a Campbell kill which made it 24-20.  But the Penguins staved off four straight match points to force extra points at 24-all.  The Crusaders never faced set point defensively though, and on their seventh match point chance, following a solo block from senior Kelsey Victor (Logansport, Ind./Logansport), Ketcham put away a kill to close the sweep.

Campbell led all players with 18 kills on Saturday, while Victor enjoyed another very efficient match, posting 11 kills on .450 hitting.  Senior Morgan Beil (St. Louis, Mo./Marquette) hit .389 with seven kills without committing an attack error, her third straight match without an error on the attack.  Berrington dished out 36 assists while the Crusader offense hit .252 in their third consecutive sweep.

Valparaiso (21-6, 7-4 Horizon) returns home to the ARC for its final weekend of home play in the regular season next weekend.  The weekend starts against Wright State at 7 p.m. Friday evening, with live video, audio and stats available through ValpoAthletics.com.