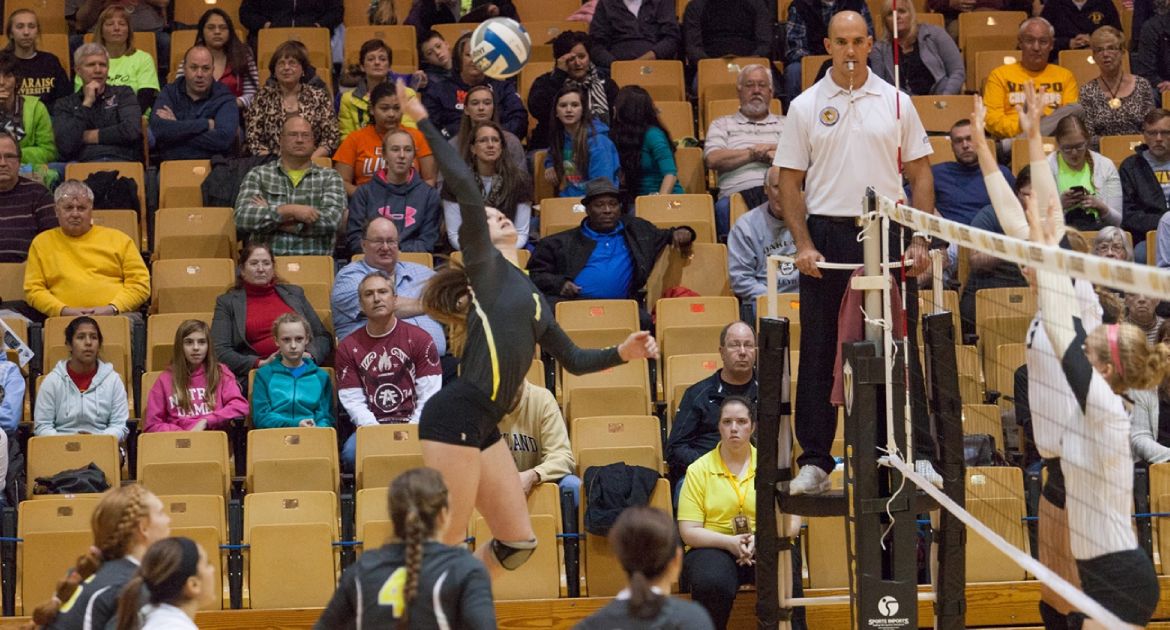 The Valparaiso volleyball team closed out the regular season in style on Saturday evening in Chicago, posting its best offensive performance in over seven years in a 3-0 (25-22, 25-21, 25-18) sweep of UIC.  With the win, the Crusaders secured the third seed for next weekend’s Horizon League Championship.

“We came into tonight’s match very focused,” said Crusader head coach Carin Avery.  “Our players had a lot of fun out there tonight and played very aggressively.”

The Crusaders hit at a staggering .426 clip for the match, posting 47 kills and committing just seven attack errors on 94 swings.  The .426 hitting percentage was Valpo’s best since matching that number in a sweep of Duquesne back on Sept. 14, 2007.  Valpo hit above .450 in both the first and third sets on Saturday.

While the Crusaders boasted prodigious attack numbers on Saturday, none of the three sets were runaway victories, as the Flames stayed close for most of the match.  In fact, in the opening set, Valpo never led by more than three points and was tied late at 22-22.  A big block from freshman Taylor Graboski (Upper Sandusky, Ohio/Upper Sandusky) and junior Kelsey Berrington (Britton, Mich./Tecumseh) gave the lead back to the Crusaders, and following a UIC attack error, sophomore Emily Campbell (Grand Rapids, Mich./Forest Hills Central) registered a kill to give the Crusaders the opener.

The second set was very similar to the first, with neither side able to gain control by more than a couple points.  Valpo led by three at 20-17, but UIC closed to within 22-21.  The Flames committed back-to-back attack errors, however, and Graboski put down an overpass to give the Crusaders a 2-0 lead heading into the in-game break.

The third set was the most one-sided of the night, but at the start, it was in the opposite direction, as UIC led 7-2 early on.  Valpo rallied to tie it up at 13-13 following a block from freshman Allison Ketcham (Mishawaka, Ind./Marian) and senior Kelsey Victor (Logansport, Ind./Logansport), and would take the lead outright, going ahead 18-16 on consecutive kills by Ketcham and Campbell.  UIC scored the next two points to tie the set at 18-all, but that would be the Flames’ last hurrah, as the Crusaders closed out the match with seven consecutive points – the last six of which were Valpo kills, three of them coming from Campbell.

With a .426 hitting percentage as a team, up and down the lineup the Crusaders had eye-popping attack numbers.  Campbell, as she has all season long, was the primary catalyst, putting down 17 kills on .571 hitting.  With the big night, the sophomore ended the regular season with 457 kills on the year, already ninth-most in a single season in program history and just three kills shy of eighth position.  In the rally-scoring era, only Angie Porché has recorded more kills in a season than Campbell.

Ketcham came up just shy of double figures, hitting .350 with nine kills, while Graboski registered eight kills on just 11 swings, hitting .636 for the match.  None of the Crusaders’ five primary attackers committed more than two hitting errors over the three sets.  Berrington handed out 41 assists in running the Valpo offense.

Defensively, sophomore Morganne Longoria (Burlington, Wis./Burlington) led all players with 17 digs.  Campbell ended the night with nine digs as well, coming up just one shy of a double-double.  At the net, Victor was in on a match-best six blocks.

Valparaiso (24-7, 9-5 Horizon) opens up the Horizon League Championship at 4 p.m. CT on Friday, Nov. 21, taking on sixth-seeded UIC in the first round matchup.  The tournament will be hosted by regular season champion Oakland.