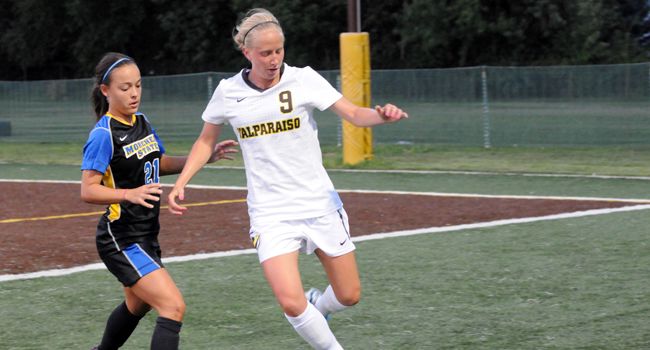 Valparaiso opened its 19th season of women’s soccer at home on Friday evening at Brown Field, but came up short in its bid for victory, falling 1-0 to Morehead State.

The Crusaders came out quick offensively in the opening moments of the match, earning a pair of corner kicks in the first five minutes of the match.  Valpo had a golden opportunity in the match’s seventh minute, drawing a penalty kick, but Eagle netminder Katie Blevins made a diving save on Casey Pedersen’s (Northville, Mich./Mercy H.S.) attempt to the lower right corner.

Valpo continued the pressure with six total shots in the opening 30 minutes, but could not find the back of the net.

“I was very happy with our first 30 minutes,” head coach John Marovich said.  “We had a balanced attack and had three good opportunities.  We need to finish those chances.”

Morehead State (1-0) managed seven total shots in the opening half, but only one was on frame and the teams went into intermission scoreless.

The Eagles had the first quality opportunity of the second half as Devan Jordan went in alone on goal just over three minutes out of the break, but Rachel DeFrank (Mason, Ohio/Mason H.S.) stepped up and made the big save.

The match stayed even until there was just 10:15left to play when Sarah Phillip took a free kick from the top of the penalty area and lobbed the ball into the goal mouth.  The ball deflected off of a Crusader and into the back of the net for the lone tally of the match.

“Our kids have done a good job of creating quality chances when they have kept possession of the ball,” Marovich added.  “In the second half we just didn’t keep the ball as well as we did to start the match.”

Valparaiso continued to test Blevins late, forcing the Eagle goalkeeper to make five total saves on the Crusaders’ 10 total shot attempts.  DeFrank made three stops for the Brown and Gold as Morehead State fired 13 total shots, nine of which were off frame.

“The reality of the match is we lost the game,” Marovich concluded.  “I’m not happy and our kids are not happy about it.  We’ll look to rebound on Sunday.”

Match Notes: DeFrank made her first career start in goal for the Crusaders … freshmen Kelsey Draper (Perrysburg, Ohio/Perrysburg H.S.) and Abby Kenyon (Canton, Ohio/Jackson H.S.) made their Valpo debuts with Draper also earning a start … Valpo is now 5-14 all-time in season openers … Aug. 19 marked the earliest Valpo has ever started a soccer season … Morehead State has now won both meetings all-time between the two schools.