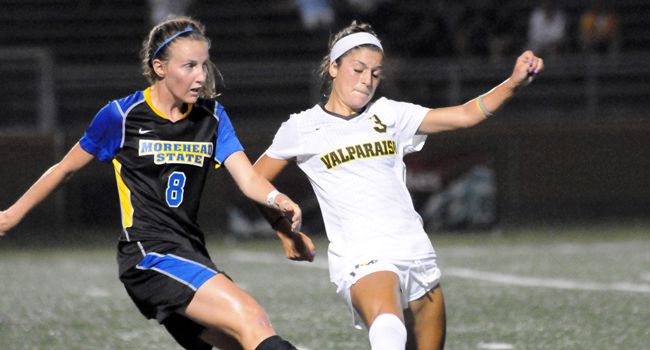 This Week in Crusader Soccer: After playing the first two matches on the turf of Brown Field last weekend, Valparaiso wraps up its season-opening three-match homestand on Sunday afternoon on the grass of Eastgate Field as the Crusaders entertain instate foe Evansville.

On the Air: Sunday’s match against Evansville can be heard live on WVUR (95.1-FM, Valparaiso) as well as online at valpoathletics.com.  Jeff Larson and Brock Galyon will be on the call.  Live stats will be available through valpoathletics.com for the match as well.

Head Coach John Marovich: John Marovich holds a 27-24-9 record both overall and with Valpo in his fourth season at the helm of the Brown and Gold.  Just the third head coach in program history, Marovich has the best winning percentage (.525) ever at Valpo, and ranks second in total victories.

Series Notes: Valparaiso and Evansville are meeting for the 10th time in a series that dates back to 1993, the inaugural season for Brown and Gold soccer.  The Purple Aces hold a 6-2-1 all-time edge, but the Crusaders are unbeaten over the last three matches.  Last year, Valpo battled the Purple Aces to a 1-1 draw on Aug. 29 in Evansville and picked up wins in 2004 and 2006.  The Crusaders are 1-3 against the Purple Aces at home with the lone victory coming by a 3-0 margin on Sept. 24, 2006.

Wrapping Up Last Week’s Action: Valpo opened the season on Friday evening dropping a 1-0 decision to Morehead State at Brown Field.  Sarah Phillip scored the lone goal of the match for the Eagles with just over 10 minutes remaining for the victory.  The Crusaders scored three times in the first half on Sunday on the way to a 4-2 triumph over IPFW at Brown Field.  Brooke Henderson, Luisa Desario, and Rachel Hoaglin scored within 15 minutes of each other in the opening stanza while Casey Pedersen added an insurance tally in the 72nd minute.

Scouting Evansville: The Purple Aces rallied late to earn a 2-2 draw at Indiana last Friday in the season opener before falling 4-0 at Saint Louis on Sunday.  Kasey Cartwright and Danielle Langness each found the back of the net for Evansville while Tasha Prentice drew and assist.  Chaviel Harrison was in goal for all 200 minutes on the weekend, making 12 saves.  Evansville was outshot 37-8 for the weekend though.  The Purple Aces host Central Michigan on Friday before heading to Valpo on Sunday.

An Offensive Onslaught: Valpo’s four goals on Sunday were the most for the Brown and Gold since the Crusaders won by the same 4-2 score one year ago on Sept. 3, 2010 at IPFW.  The last time Valpo scored five times in a match was a 5-1 victory over Lewis on Oct. 8, 2006.

Isn’t This Ironic?: Valparaiso’s goal scorers on Sunday in the 4-2 victory over IPFW were the exact same quartet of players to find the back of the net one year ago when the Crusaders downed the Mastodons in Fort Wayne by the same score.  Brooke Henderson, Luisa Desario, Rachel Hoaglin, and Casey Pedersen all found the scoreboard on that night as well.

Freshmen See Action on Opening Weekend: Crusader freshman Kelsey Draper started both matches last week in the midfield during her inaugural weekend in a Brown and Gold uniform.  Classmate Abby Kenyon also saw action in both contests, drawing an assist on the final goal of the match against IPFW for her first collegiate point.  Kristen Warner also saw time on the pitch for her collegiate debut against the Mastodons on Sunday.

Moving Onto the All-Time Scoring Charts: Luisa Desario has moved into a tie for 10th place all-time at Valpo with 26 career points after picking up a goal and an assist against IPFW.  She is tied with Jessie White (2006-2009) on the all-time charts.  The junior has 10 career goals and six assists, and is just one goal shy of the top-10 all-time in a Crusader uniform.  Rachel Hoaglin now has 24 career points, including nine goals, after her three-point match against the Mastodons as well, and is on the verge of moving on the career charts as well.

A Fixture on Defense: Senior Tracy Roos has started all 60 matches on the Valpo backline since arriving on campus in 2008.  Junior Janine Lytle has also started every match of her three-year career thus far, all 41 contests.

Team Captains: Valpo will have co-captains for the 2011 season.  Senior Tracy Roos has been named a team captain for the third straight season and will be joined in that role by classmate Brooke Henderson.

This and That: Rachel DeFrank earned her first collegiate victory in goal against IPFW ... 52% (13-of-25) of Valpo’s shot attempts have been on goal this year ... all four of Casey Pedersen’s shots have been on frame ... the Evansville match wraps up Valpo’s longest homestand ever to start a season, three (equalled in 1996 and 2007).