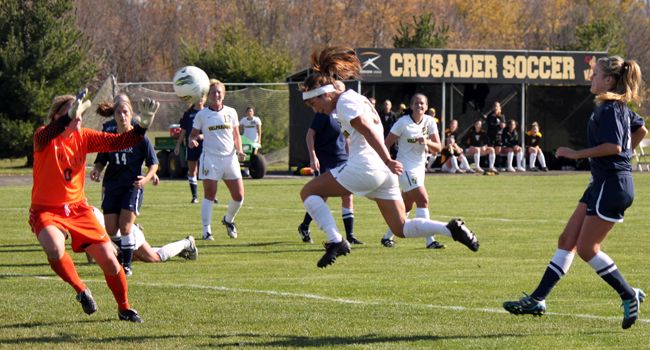 Two halves and two overtimes were not enough to settle the Horizon League quarterfinals on Tuesday afternoon, and after eight rounds of penalty kicks Butler defeated Valparaiso 5-4 in the shootout at Eastgate Field after the two sides played to a 2-2 draw through 110 minutes.

Kristen Manski (Saint Charles, Ill./North H.S.) saved Butler’s first kick in the shootout while Valpo made its first three tries.  Tied at three after the Bulldogs’ fourth attempt, Butler’s Julie Burton made a stop of the Crusaders’ fourth attempt.  Both keepers saved the fifth attempts and the shootout went to sudden death.

Round six saw Butler’s Caroline Kowal and Valpo’s Amanda Ulin (Solon, Iowa/Solon H.S.) trade makes before round seven saw Manski make a save while the Crusaders missed wide left.  Rachael Melendez converted what would be the match-winner in round eight while Valpo’s attempt to tie hit the goal post.

“Penalty kicks are always a difficult way to decide a match,” head coach John Marovich said afterwards.  “I respect each and every kid that steps up and takes one.  They took the full responsibility to put their team on their shoulders.  It’s a hard way to end the season because the battled so hard all season long.”

Valpo struck first just under 18 minutes into the match.  Abby Kenyon (Canton, Ohio/Jackson H.S.) flipped the throw-in deep into the goal mouth and Luisa Desario (Bartlett, Ill./Bartlett H.S.) got her head on the ball and beat Burton to make it 1-0 Crusaders.

Just 1:32 later, the Crusaders added to their advantage.  Casey Pedersen (Northville, Mich./Mercy H.S.) collected a loose ball about 40 yards from goal and fired a blast into the back of the net.

Butler, the tournament’s sixth seed, cut the Valpo lead to 2-1 at the 28:16 mark as Rachel Scott knocked home a rebound in the box from a Katie Griswold shot.

Olivia Colosimo tied the match at two just 5:28 before halftime converting a free kick from the top of the 18-yard box.

“We battled really hard to score two early goals, unfortunately we gave a couple away late in the half,” Marovich added.

The Bulldogs outshot Valpo 14-8 in the opening stanza, with both Manski and Burton making three saves.

Valpo, the three seed in the tournament, outshot Butler 6-3 in the second half, forcing Burton to make four more saves to force overtime.

Neither team had a quality chance in the second overtime, and the match went to penalty kicks.

Butler outshot Valpo 20-17 for the match with Burton making seven saves while Manski had four stops.

We wanted to give the campus a Horizon League Tournament win today,” Marovich concluded.  “Everyone was so supportive and we wanted to thank everyone that took time out on a Tuesday afternoon to come out and watch us.  Unfortunately it didn’t happen.”

With the match officially going in the record books as a tie, Valpo finishes the year with three straight draws and an 8-6-5 record.

Butler (8-9-2) advances to the semifinals on Friday evening to face top-seeded Milwaukee in Milwaukee, Wis.

Match Notes: This was Valpo’s third penalty kick shootout all-time, defeating Oakland 4-2 in the Mid-Continent Conference semifinals in 1999 while falling to Youngstown State 5-4 in the first round in 2008 … Butler holds a 6-3-1 all-time series advantage between the two schools … Tracy Roos (Centennial, Colo./Cherry Creek H.S.) concluded her career starting all 77 matches of her career, ranking fourth on the all-time charts … she finished sixth all-time on the career matches played list as well … Desario’s goal was the 14th of her career, tying her for sixth on the all-time list with teammate Rachel Hoaglin (Lakeville, Minn./Academy of Holy Angels H.S.) and Sarah Jewell (2006-2009) … Desario also has 35 career points now, tied with Lindsay Holley (2001-2004) for seventh all-time … Pedersen’s goal was the eighth of her Valpo career and she graduates with 21 career points … Manski finished the season with a 0.92 goals against average, third on the single season charts … Valpo has tied seven straight overtime matches dating back to 2010.