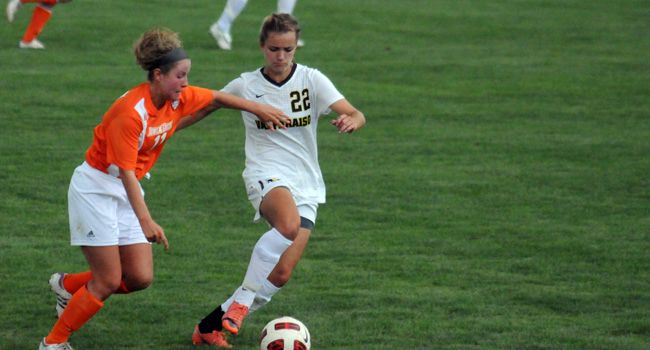 This Week in Crusader Soccer: Coming off of a four-match road trip, the Valparaiso women’s soccer team returns home for five out of its next six contests, beginning with a pair of Horizon League fixtures this week as Valpo hosts Milwaukee on Wednesday afternoon and Detroit on Saturday afternoon.

Previously: Valpo opened Horizon League play by earning three points on the road, defeating Cleveland State 2-1 behind goals from Luisa Desario and Rachel Hoaglin. The Crusaders closed out their four-match road trip with a 3-1-0 record.

The Road Ahead: Valpo steps out of league action for the final time this season on Tuesday, Oct. 9 as the Crusaders host Saint Joseph’s (Ind.) at Brown Field. Valpo then travels to take on Wright State Saturday afternoon, Oct. 14.

Following the Crusaders: WVUR, 95.1 FM, Valpo’s campus radio station will be broadcasting Wednesday’s match against Milwaukee live over its airwaves. The live audio can also be found online at www.valpoathletics.com, which will also have links for live stats for both this week’s contests.

Head Coach John Marovich: John Marovich holds a 41-32-15 record both overall and with Valpo in his fifth season at the helm of the Brown and Gold. Just the third head coach in program history, Marovich has the best winning percentage (.551) ever at Valpo, and ranks second in total victories.

Series Notes: Valparaiso is looking for its first win in program history against Milwaukee, as the Panthers have won all 13 previous matchups between the two sides, including a 2-0 victory in Milwaukee last season. Against the Titans, Valpo is just 2-6-0 all-time and Detroit has won two straight meetings, including a 2-0 win last season in Detroit.

Scouting the Opposition: Milwaukee enters Wednesday’s match just 2-7-1 on the season and 1-2-0 in Horizon League play, most recently losing 2-1 at Youngstown State. The Panthers, who have won 12 straight HL regular season titles, are led offensively by Kelly Lewers, who has scored three goals and tallied three assists. Jamie Forbes has played every second in goal and owns a 1.71 GAA. Detroit enters the week atop the HL standings at 2-1-0 in league play (5-5-1 overall). The Titans have seen five different players score multiple goals this season in a balanced offensive attack, while in goal, Nora Ablins boasts a miniscule 0.68 GAA.

Home Sweet Home: The Crusaders return home this week for the first time in over three weeks and play five of their next six matches at home (four at Eastgate Field, one on Brown Field). Valpo already owns a 4-0-1 mark at home this season and is unbeaten in its last 10 home matches dating back to 2011 (6-0-4). The Crusaders are just three victories shy of the program record for home wins, held by numerous teams at seven.

Scoring Close to Time: There’s cutting it close, and then there’s what the Crusaders did to end the first half at Cleveland State on Friday. Senior Rachel Hoaglin found the back of the net with just one second remaining in the first half for Valpo’s second goal of the game, the eventual match-winner in a 2-1 victory. It marks the second time in the last two seasons that a last-second goal has proven to be the match-winner in league play, as the Crusaders won a 1-0 game against Butler last year on a goal with five seconds remaining in the first half.

Desario Leads the Offense: The first Crusader to score multiple goals on the season, senior Luisa Desario found the back of the net for the fourth time in 2012 with Valpo’s first goal in the win over Cleveland State. Desario, who picked up the match-winning goal in the season opener against IUPUI and also scored against Iowa and Western Michigan, continues her march up the Crusader career charts in a number of categories, as she is now tied for fourth in career goals (18), alone in fourth in career points (43), and tied for fifth in match-winning goals (6).

Keeping Opponents Off the Scoreboard: Valparaiso ranks among the nation’s best teams in keeping the opposition from finding the back of the net. The Crusaders have posted six shutouts in 11 matches, good for a shutout percentage of 54.5%, which is tied for 23rd nationally. Valpo’s team GAA of 0.62 ranks 21st in the nation as well. Individually, Kristen Manski’s 0.62 GAA is good for 24th in the nation. Valpo has stepped up the defense recently, surrendering just two goals in its last six matches, while Manski was named HL Defensive Player of the Week on Sept. 10.

Freshmen With the Winners: Three different Crusader rookies have come up with match-winning goals in 2012 for Valpo. Most recently, Jordyn Ryfiak tallied the decisive goal in a 1-0 win at Saint Mary’s, while Rita Craven (IPFW) and Sarrah Ludwig (Bowling Green) also have picked up match-winners. In fact, four of the five goals from the freshmen class have served as match-winning or tying markers, as Ludwig knotted up the match with Kent State late.

Playing Every Game: Valpo has maintained a fairly consistent starting lineup through the first half of the 2012 season, as nine players have been part of the Starting XI every time out for the Crusaders. In all, 14 players have seen action in each of the first 11 games for Valpo this season. Three players - defenders Tara Ellis and Janine Lytle and goalkeeper Kristen Manski - have not come off the pitch at all, playing all 1012 minutes to date. For Lytle, it extends an impressive streak, as the senior has come off the field for just 31 minutes total through her first 3 1/2 years.