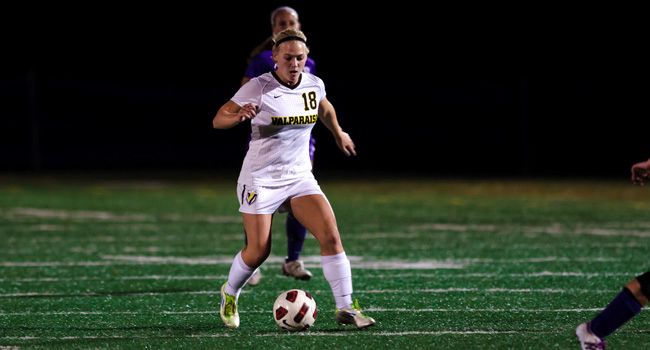 This Week in Crusader Soccer: The Valparaiso women’s soccer team opens a stretch of four straight Horizon League contests to close out the 2012 regular season on Sunday afternoon, as the Crusaders travel to Wright State for a key Horizon League showdown.

Previously: Valpo went 2-1-0 in a three-match homestand over a seven-day stretch. The Crusaders surrendered an early goal in a 1-0 loss to Milwaukee before scoring in the 87th minute for a 1-0 win over Detroit. Valpo then stepped out of league play to down Saint Joseph’s (Ind.) 2-0 on Tuesday evening.

The Road Ahead: The Crusaders return home for their final two matches at Eastgate Field of the regular season next week. Valpo hosts Loyola on Wednesday afternoon before welcoming Youngstown State on Saturday.

Following the Crusaders: Live video of Sunday’s matchup at Wright State will be available through the Horizon League Network. Links for the live video, as well as live stats, can be found at www.valpoathletics.com.

Head Coach John Marovich: John Marovich holds a 43-33-15 record both overall and with Valpo in his fifth season at the helm of the Brown and Gold. Just the third head coach in program history, Marovich has the best winning percentage (.555) ever at Valpo, and ranks second in total victories.

Series Notes: The Crusaders are just 1-8-1 all-time against Wright State, but have earned both results against the Raiders in the last three meetings after losing each of the first seven matchups. Last season saw the sides battle to a 2-2 draw in Valpo, with Crusader goals being scored by Casey Pedersen and Luisa Desario. Kristen Manski made six saves in goal to preserve the tie.

Scouting the Opposition: Wright State enters Sunday’s contest at 6-3-5 overall and 1-1-2 in Horizon League play, most recently falling 1-0 to Detroit in midweek action. The Raiders, who are currently in fifth place in the league table, have scored 20 goals on the season, led by six goals and two assists from Ini Umotong. Emilie Fillion and Ashley Miltko have added four goals apiece as well. In goal, Brooke McCurdy has played all but 33 minutes and owns a 0.67 GAA and a league-best .880 save percentage.

The League Race: Sunday’s fixture could end up being a critical one for the Crusader women. A win would move Valpo into a tie atop the table with Detroit and Milwaukee (pending Detroit’s result on Sunday), with a game in hand on both sides. As in the past, the top six finishers make the Horizon League Championship, but with just seven league games this season, each result becomes more magnified.

Scoring Late, Scoring Early: Valparaiso’s match-winning goals the last two games have come on opposite ends of the spectrum. Jordyn Ryfiak found the back of the net in the 87th minute in the Crusaders’ 1-0 win over Detroit, Valpo’s latest match-winner since a 88th minute goal from Mikki Nuccio on Oct. 9, 2011 against Cleveland State. Then last time out, Sarrah Ludwig headed home a corner from Tara Ellis just 65 seconds into the match, the second-fastest goal to open a game in Crusader history.

Milestones: A pair of Crusaders recorded career firsts on Tuesday against Saint Joseph’s. Junior Hailey Chmela scored an insurance goal in the 36th minute for the first goal of her career. Meanwhile, freshman Sarah Silvasi made her first career appearance, starting in goal, and made three saves to ensure the clean sheet.

Desario Leads the Way: Senior Luisa Desario has tallied a team-high four goals in 2012, giving her 18 career goals, tied for fourth-most in Crusader history. The senior also registered her second assist of the year on the insurance goal Tuesday, giving her nine career helpers, ninth-most all-time at Valpo. Desario, who ranks sixth in the league with 10 points, also sits fourth in Crusader history with 45 career points.

Keeping Opponents Off the Scoreboard: Valparaiso ranks among the nation’s best teams in keeping the opposition from finding the back of the net. The Crusaders have posted eight shutouts in 14 matches, good for a shutout percentage of 57.1%, which is tied for 20th nationally. Valpo’s team GAA of 0.56 ranks 14th in the nation as well. Individually, Kristen Manski’s 0.60 GAA is good for 21st in the nation. Valpo has stepped up the defense recently, surrendering just three goals in its last nine matches.

Playing Every Game: Valpo has maintained a fairly consistent starting lineup through the first half of the 2012 season, as seven players have been part of the Starting XI every time out for the Crusaders. In all, 11 players have seen action in each of the 14 fixtures for Valpo this season. Heading into Tuesday’s game against Saint Joseph’s, three players - defenders Tara Ellis and Janine Lytle and goalkeeper Kristen Manski - had not come off the pitch at all, playing all 1192 minutes through the season’s first 13 games. But against the Pumas, Manski got the night off in goal, while Ellis came off at the half for the first time this year. However, Lytle played all 90 to extend an impressive streak, as the senior has come off the field for just 31 minutes total through her first 3 1/2 years.