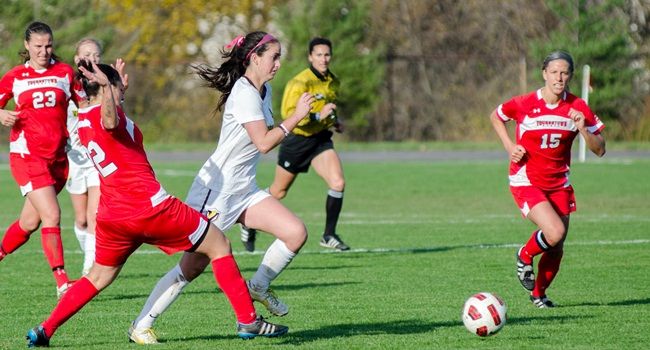 The Valparaiso women's soccer team battled Loyola on a cold, windy, rainy Tuesday afternoon at Eastgate Field in the quarterfinal round of the 2012 Horizon League Championship, but a tenth-minute goal from the Ramblers sent the Crusaders to a 1-0 defeat. The loss ends Valpo's season with a 10-6-3 record.

With sustained wind speed out of the north-northwest of 25 miles per hour, blowing nearly straight down the pitch, as well as gusts exceeding 40 MPH, the weather would play a big factor in Tuesday's matchup. The third-seeded Crusaders had the wind at their back for the first half, but the first quality chance went to the sixth-seeded Ramblers on a counter in the tenth minute, a chance which they finished. Moriah Schwarz pushed a pass forward to Tricia Stonebraker, who fed Allison Shimer on the right side of the box. Shimer's shot from eight yards out beat Crusader goalkeeper Kristen Manski (Saint Charles, Ill./North) and found the back of the net inside the far post to put Loyola ahead 1-0.

Valpo controlled the run of play for the rest of the first half, ending the opening period with a 13-4 advantage in shots. The Crusaders also earned six corner kicks while surrendering none to the Ramblers over the first 45 minutes. But Loyola handled a number of dangerous attempts off the corner from Valpo, while Loyola goalkeeper Monica Gonyo stopped five shots on goal in the first half to keep the Crusaders down 1-0 into the break.

The second half saw the sides switch ends and the Crusaders have to fight against the wind looking for their first goal. Valpo did a solid job of keeping the Ramblers from any quality chances at an insurance goal, giving up just six shots over the second 45 minutes, only one of which was on goal, while dealing nicely with Loyola's four corner kick opportunities. But the Crusaders would register just one shot themselves in the second half, a header by freshman Sarrah Ludwig (Downers Grove, Ill./South) in the 71st minute which was easily handled by Gonyo. Valpo had a pair of corner kicks in the second period and also had a number of other pushes forward, but could not find the equalizer.

Valpo ended the game with a 14-10 advantage in shots, including a 6-4 edge in shots on goal. Manski ended the afternoon with three saves, while Gonyo made six saves for Loyola (8-8-2).

The loss ends the Crusaders' season at 10-6-3, their eighth season winning at least 10 matches in the last 12 seasons. Valpo excelled defensively in 2012, surrendering a program-record low 10 goals in its 19 matches and also setting a team single-season record with a 0.51 GAA. The Crusaders' 11 shutouts also set a new program mark for clean sheets in a single year.

Individually, junior Tara Ellis (Portage, Ind./Portage) moved into Valpo's single-season top-ten with a team-high four assists in 2012. In goal, Manski ended the year with a 0.54 GAA and 10 shutouts, setting and matching the Crusader single-season records in those respective categories.