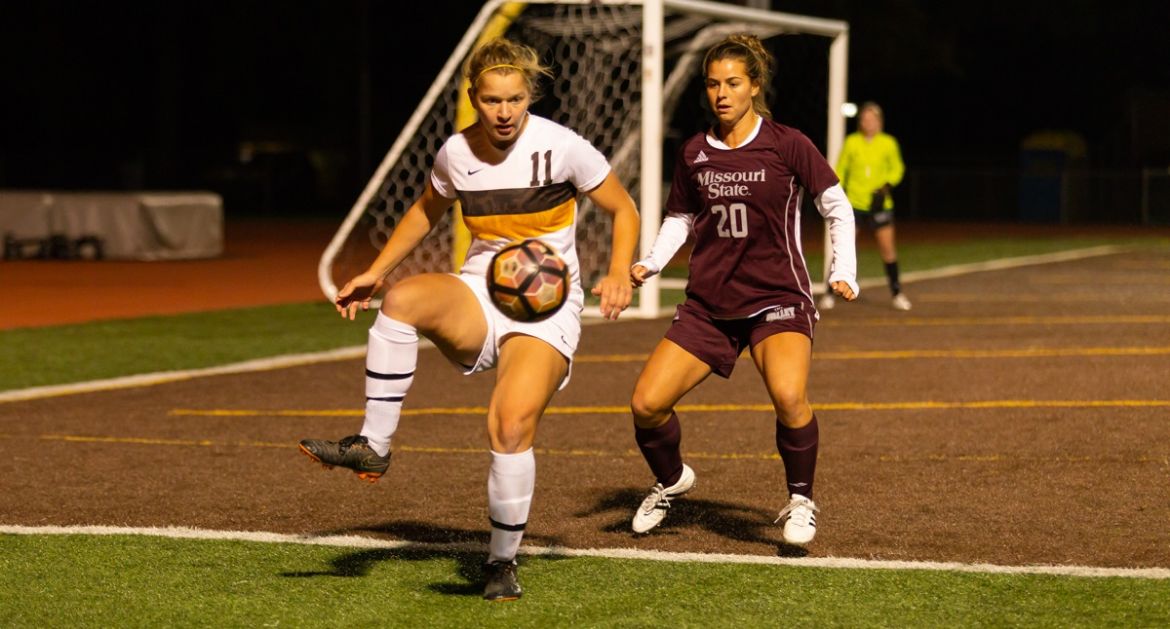 Ava Porlier opened the scoring midway through the first half Saturday.
Missouri State at Valparaiso | October 13, 2018

The Valparaiso University women’s soccer team earned its second result in MVC play this week, battling to a 1-1 draw with visiting Missouri State on a chilly Saturday night on Brown Field.

How It Happened
- Valpo put pressure on the MSU defense and goalkeeper Kaitlin Maxwell early in the game, and it paid off with the game’s opening goal in the 23rd minute. Junior Maria Broecker (Rochester Hills, Mich./Rochester) laid a pass down the right touchline for senior Caitlyn Oliver (Commerce Township, Mich./Walled Lake Northern), who brought it in a bit before crossing into the box. On the other end to receive it was senior Ava Porlier (Downers Grove, Ill./South), who struck a shot from 13 yards out along the ground inside the left-hand post to give Valpo the 1-0 lead.
- It remained a 1-0 Valpo advantage through halftime and into the second half, but with the first shot of the second half for either side came the equalizer for the Bears in the 60th minute. A scramble in the six-yard box following a free kick resulted in MSU’s Jordan Eickelman striking from close range to make it a 1-1 scoreline.
- Both sides had strong chances for a potential match-winner in the final 10 minutes of regulation. A fine team move out of its defensive third from Valpo set up a cross from senior Sydney Griffin (Hinsdale, Ill./Hinsdale Central [New Hampshire]) into the center of the box for Cory Griffith (Lemont, Ill./Providence Catholic) in the 84th minute, but Griffith was unable to get her header down on frame.
- The Bears looked to strike in the 88th minute off of a corner kick, but a point-blank header from Brittney Robinson was stonewalled by Valpo goalkeeper Kezia Gesell (Winnipeg, Manitoba/Glenlawn Collegiate Institute), and Robinson’s follow effort ricocheted back off the crossbar.
- Missouri State held a 5-1 advantage in shots over the two periods of extra time, but its only effort on goal was from distance and easily handled by Gesell as the match ended in a 1-1 draw.

Inside the Match
- Valpo has earned results in each of its last three matches (1-0-2), its longest run of results since going 2-0-2 over a four-match stretch in September of 2015.
- Porlier’s goal was her third of the year, second only to Griffith for team-high honors. Oliver picked up her first career assist with the primary helper, while Broecker now owns three career assists.
- Coming off of her career-high 12-save effort in Monday’s win, Gesell made six saves in Saturday’s draw. The sophomore saw her season GAA drop to 0.96 and has now allowed one goal or fewer in seven of her eight starts this season.
- After holding a 7-4 advantage in shots at halftime, Valpo was out-shot by Missouri State 15-6 over the final 65 minutes as the Bears ended the night with a 19-13 edge in that category. It is just the third time this season Valpo has been out-shot by its opponent.

Thoughts From Coach Marovich
"I'm super proud of our group tonight. We competed extremely hard and put forth the effort that is expected every night in this conference. I thought Caitlyn Oliver was really a driver of that energy and that competitive level tonight, and I felt the back line was really solid throughout the match dealing with balls in the air."

"This is The Valley, games like this - close, competitive matches where on any given night, anybody can get a result. Teams are out there constantly scrapping and trying to find points. Obviously we would have loved to get three points tonight, but we put in the work necessary to at least come away with one."

"We move on to another game on Wednesday against Loyola - we need to keep replicating this kind of performance, this kind of effort, and this kind of competitiveness if we want to continue earning points in The Valley."

Next Up
Valpo (4-6-3, 1-2-1 MVC) hosts Loyola in mid-week action on Wednesday evening from Brown Field. Kickoff is slated for 7 p.m., and the match can be seen live on ESPN+.